The Dallas Mavericks will finally be lacing up their shoes in anger on Tuesday night as the schedule wakes them from their eight-day hibernation and host the Oklahoma City Thunder in Game 1 of the 2011 NBA Playoffs Western Conference Finals. There's plenty of bad blood already between Oklahoma and Texas college football fans, adding a little professional basketball rivalry can only increase the fun.

Kevin Durant (22) and Russell Westbrook (22) lead a team who's average age of their top five players (in minutes played) is 22.4-years-old. They are exceptionally skilled and if they can stay together along with James Harden (21) and Serge Ibaka (21), make up the nucleus of a potential Western Conference dynasty.

In the playoffs, however, experience matters and the Mavericks are loaded with that. Jason Kidd (37) and Dirk Nowitzki (32) will try and drag their elderly team up and down the court and keep the Thunder in check. The average age of the Dallas top five players is a full decade older than their opponent.

Skill and wisdom versus youth and athleticism will be on display on this series. The match ups clearly favor OKC, but it's hard to pick against the hunger of Dirk Nowitzki.

Interestingly enough, the biggest question marks on both teams are at the same position. Jason Kidd will struggle with Westbrook's speed but the Thunder point guard needs to raise the level of his mental game and be smart about when to attack and keep his eyes up and look to create when he does. 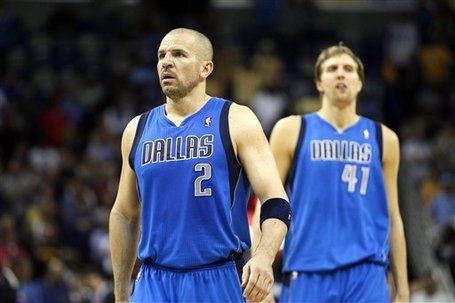 This file photo shows Dallas Mavericks point guard Jason Kidd (2) and forward Dirk Nowitzki, of Germany, (41) walking on the court in the second half of an NBA basketball game against the New Orleans Hornets in New Orleans. Refreshed by a full week off, Kidd and Nowitzki are gearing up for another chance at a title. In their way are Kevin Durant and the Oklahoma City Thunder in a Western Conference finals that opens Tuesdsay night. (AP Photo/Patrick Semansky,File)