The Oklahoma City Thunder and the Dallas Mavericks are set to tip off their 2011 NBA Playoff Western Conference Finals series with Game1 in Dallas on Tuesday. It should be an exciting series given the star power, talent and depth of both teams. The Mavericks are favored by most experts to win the series and understandably so.

The Mavericks have the better record, more experience, and the best player in the series. Those are all the same reasons the Lakers were predicted to beat Dallas and that didn't turn out so well. I originally was leaning towards the Mavericks as well, but after thinking more about the match ups and seeing how the Thunder responded in Game 7 against the Grizzlies, I've changed my pick.

Here's how I see the series breaking down:

The Mavericks Tyson Chandler has been a revelation this season. Or perhaps a better word is a resurrection. After a couple of injury-plagued years (that ironically nixed a trade to OKC), he's given the Mavericks everything they've needed and more. Defense and rebounding and the ability to at least be a threat offensively.

The Thunder upgraded the position with the mid-season trades for Kendrick Perkins and Nazr Mohammed. But Perkins isn't nearly as mobile on the perimeter as Chandler, isn't as long, isn't as athletic, and isn't a scoring threat at all.

There's nothing more to be said about Dirk Nowitzki and Kevin Durant. Both of these guys are fantastic perimeter players. The real story here is their defenders and which team is better positioned to at least bother the other team's star.

The Thunder will throw Serge Ibaka at Dirk. Ibaka is mobile enough to stop Dirk's drive and strong enough to at least not get killed in the post and active enough to keep Dirk off the glass. No one on the planet can stop Dirk's fadeaway so the key is to take away as much of the rest of his game and Ibaka can do a decent job with that. Nick Collison can also eat some minutes and at least hold his own on Dirk and bang him around a bit.

The Mavs are a deep team but with the Caron Butler injury they have a hole at small forward. They will be forced to play Shawn Marion big minutes on Kevin Durant. If this was 2005, that would be a good use of Marion's defensive skills. Unfortunately, Father Time has slowed The Matrix and it will be hard for Marion to stay with Durant throughout the series and Dallas gives up floor spacing with Marion on the court.

Behind Marion, the Mavs can play Corey Brewer at times but Peja Stojakovic who played a lot of small forward minutes doesn't stand a chance defending Durant. The Mavericks also like to run a three guard line up with Jason Kidd playing small forward next to Jason Terry and J.J. Barea. The Thunder will eat that up.

The Mavericks quick guards torched the Lakers but will have a much harder time with the Thunder. J.J. Barea still might drive on Westbrook at times but on the other end the 5-10 Barea will be chewed up by Russell's strength and size.

Jason Kidd is effective playing off the ball but the Thunder can throw James Harden or Thabo Sefalosha at him. There's not a single guard Kidd will face that he can post up. On the other end however, Harden and Westbrook will have a size advantage on Terry and Barea. OKC doesn't have a post up player on their front line, but if they are smart, they will abuse the smaller Dallas guards in the paint and force Rick Carlisle to sacrifice offense and bring in his defensive players - Brewer or DeShawn Stevenson.

The Dallas Mavericks with Chandler and Brendan Haywood were well positioned to defend the Lakers interior size. The Thunder don't score in the paint which negates that advantage. If the Mavericks go small and play Dirk at the five, the Thunder can answer and still create a mismatch with Durant at the four. OKC can then play Harden, Sefalosha (or Cook) and Westbrook on the wings and still have both shooting, penetration and size.

The Thunder would be smart to be the team that goes small first and play Collison at the five with Ibaka and Durant at the four and three. Collison and Ibaka space the floor well enough for Durant or Westbrook or Harden to abuse their smaller defender in the post. In this series I wouldn't be surprised if that's the Thunder's best five-man unit even if Chandler is on the floor. Tyson is not enough of a post threat to negate the advantage.

This is where the edge shifts back to Dallas. Between home court and Dirk's desire and leadership and toughness, the Mavericks have every opportunity to win this series and get back to the NBA Finals. If they do beat OKC, it will be on the back of Dirk Nowitzki and with some help from the Thunder's inexperience.

There's been a lot of talk about Westbrook and Durant being able to work together and in this case, it's not just a media-hyped story. We've seen examples of Westbrook losing playoff games with his selfish play and we've seen him at his best, being a facilitator, defender and rebounder. Which parts of his game the 22-year-old chooses to feature will decide this series. 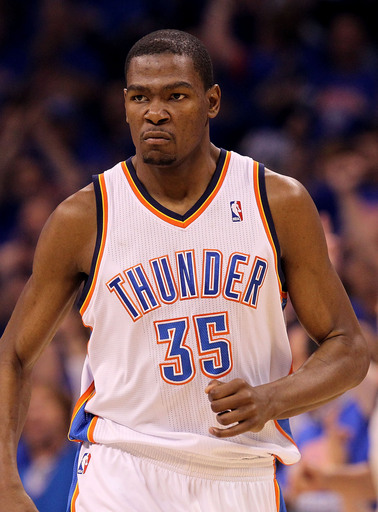 OKLAHOMA CITY, OK - MAY 15: Forward Kevin Durant #35 of the Oklahoma City Thunder reacts after making a three-point shot against the Memphis Grizzlies in Game Seven of the Western Conference Semifinals in the 2011 NBA Playoffs on May 15, 2011 at Oklahoma City Arena in Oklahoma City, Oklahoma. (Photo by Ronald Martinez/Getty Images)