The Dallas Mavericks must be dying to get started with their Western Conference Finals series against the Oklahoma City Thunder. The schedule calls for the I-35 series to kick off on Tuesday with the third-seed Mavericks holding both home court advantage, a six-point spread for Game 1, and favorable predictions from most experts. The Thunder are a flawed team in many ways but they showed a lot of growth in their Game 7 win and will not go quietly into the north Texas night like the Lakers.

The Thunder eliminated the Memphis Grizzlies in Sunday's Game 7 behind their best performance of the 2011 NBA Playoffs. Russell Westbrook's 14 assists and 10 rebounds were far more impressive than his 40-point Game 4. Kevin Durant regained his stride with some smart adjustments against the aggressive Grizzlies pressure and dropped 39 to win the series. But mostly it was Nick Collison's defense against Zach Randolph that helped hold Memphis to just 58 points through three quarters while the game was being decided.

James Harden has grown into the all-around player his fans in Arizona knew he could be and he's getting the national recognition that only a deep playoff run can bring to a young player. The Thunder go 10 deep in their rotation and have a versatile line up that proved they can adjust to various styles of play.

The Mavs eliminated the LA Lakers in a four-game sweep seemingly months ago and at this point are sick and tired of inter-squad practices. The oldest team in the NBA Playoffs is now rested and perhaps a bit rusty. Another very deep team, Dallas has proven it's ability to play both ends of the floor and with Dirk Nowitzki they roll out the most unguardable player in the postseason so far.

It's the several favorable match ups in this series which pushed my prediction. Harden has size over Jason Terry but still can defend him fairly well. Jason Kidd and J.J. Barea will both struggle with Russell Westbrook's speed and size and the Mavericks thinnest position happens to be the small forward where Kevin Durant plays.

On first glance there's every reason to predict the Mavericks will win this series and advance to the NBA Finals but looking deeper at the match ups, the edge goes to the Thunder. If Westbrook can avoid taking too many bad shots and remember that his team is at its best when he's passing, rebounding and defending, the Thunder can win this series.

The full TV schedule for the series follows. All games will be broadcast on ESPN. 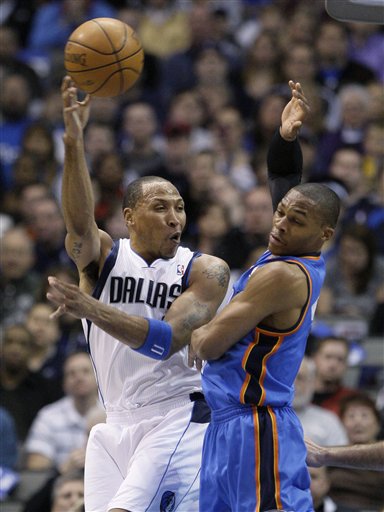