Preakness Stakes Contenders: Nehro May Run After All

Share All sharing options for: Preakness Stakes Contenders: Nehro May Run After All

In the aftermath of the 137th Kentucky Derby, Ahmed Zayat, owner of second place finisher Nehro, announced that his horse would not race in the Preakness Stakes, but rather would rest and prepare for the Belmont Stakes on June 11.

Apparently, all of that conjecture has gone out the window.

Zayat has nearly changed his mind, and will determine at a Monday workout whether or not his prize horse will run in at Pimlico on May 21.

With three consecutive second place finishes on his record, Nehro has proven that he is a championship-caliber horse. Losing to Archarcharch, Pants On Fire, and Animal Kingdom in the last three races, Nehro may still be ready to win a big purse for Zayat:

"He came out of the race well, but he's run three races in six weeks and he delivered for us in each of them," [assistant trainer Scott] Blasi said. "Now we'd be asking him to come back in just two weeks. It'll probably be a game-time decision as to whether we run in the Preakness."

With the field still up in the air, betting lines have yet to be finalized for the race. Nehro's presence would even out a field currently dominated by Animal Kingdom and Mucho Macho Man. 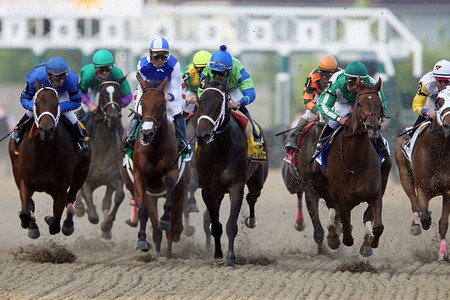 BALTIMORE - MAY 14: Acting Happy, ridden by Jose Lezcano, races against the pack toward turn 1 during The Black Eyed Susan Stakes at Pimlico Race Course on May 14, 2010 in Baltimore, Maryland. (Photo by Jim McIsaac/Getty Images)