Preakness Stakes: Sway Away Makes Field After Santiva Bows Out

Share All sharing options for: Preakness Stakes: Sway Away Makes Field After Santiva Bows Out

Sway Away will be running in the 136th Preakness Stakes on Saturday, May 21.

Failing to qualify for the Kentucky Derby due to "insufficient graded stakes money," Sway Away was included in the 14-horse field after Derby 6th place finisher Santiva withdrew, likely to begin preparations for the Belmont Stakes.

Sway Away hasn't won a race since last June, and the colt has two second place finishes in his last four tries. His most recent race, run with jockey Garrett Gomez, was a fourth place finish in the Arkansas Derby. In that Derby, Kentucky Derby horses Archarcharch and Nehro finished in the top two slots.

In other news, Nehro's owner is sincerely considering allowing the Kentucky Derby runner-up to race in the Preakness. Initially, Nehro was due to rest until the Belmont Stakes, but his recent work at Churchill Downs has his owner thinking that he might have a chance to win at Pimlico. 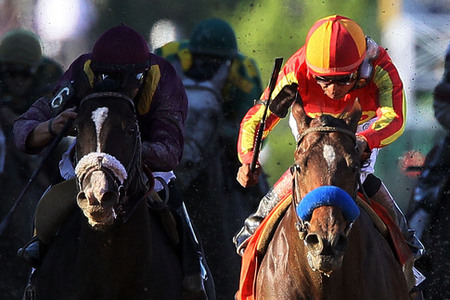 BALTIMORE - MAY 15: Lookin At Lucky (center), ridden by Martin Garcia #7, holds off Jackson Bend , ridden by Mike Smith #6, down the homestrech to win the 135th running of the Preakness Stakes at Pimlico Race Course on May 15, 2010 in Baltimore, Maryland. (Photo by Jim McIsaac/Getty Images)