Well, I certainly wasn't able to follow up a stellar first round of predictions with that second round. Upsets in the East and favorites in the West; not what it looked like after the first round. Still, two pretty intriguing match-ups heading into the Conference Finals so let's take a look.

The Sharks have never made it to the Stanley Cup Finals and are looking to get it done here in their 20th season in the league. San Jose made it an awfully interesting series against the Red Wings in the conference semi-finals, blowing a 3-0 series lead before finally taking the seventh game at home in a tightly fought battle. Some younger players have been excelling for the Sharks, including Calder Trophy finalist Logan Couture and Devon Setoguchi. For the Sharks, however, they need their captain Joe Thornton to continue playing a solid physical game in these finals and lead them to the promised land. Having Dany Heatley and Patrick Marleau lighting the lamp regularly wouldn't hurt either. With Antti Niemi between the pipes, they've got a Stanley Cup Champion goalie that made some huge saves surviving the push from Detroit.

Meanwhile Vancouver is coming off of a solid series victory over a very good defensive team in Nashville. The Canucks were the best team in the league for a reason this year; they finished in the top five in the league in goals for, goals against, and on the power play and penalty kill. Really, there's little this team doesn't do well. And while the Sedins haven't exactly been lighting things up this postseasson, "American Hero Ryan Kesler" (phrase TM @Yotesgurl) has been simply incredible in the playoffs this year. There may be some worries that Roberto Luongo is due for a flameout, but he's a top class goalie and maybe he exorcised some demons by beating Chicago in the first round.

Overall, these were the two best teams in the ultra-competitive Western Conference this year and it just might come down to something as simple as which team gets that one bounce or avoids a silly penalty. I'll go with the President's Trophy winner to get those breaks.  Canucks in 6. 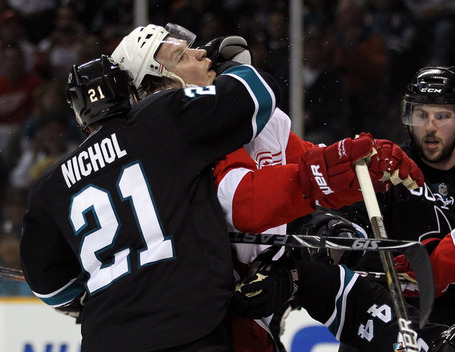 SAN JOSE, CA - MAY 12: Scott Nichol #21 of the San Jose Sharks wraps his arm around Justin Abdelkader #8 of the Detroit Red Wings in Game Seven of the Western Conference Semifinals during the 2011 NHL Stanley Cup Playoffs at HP Pavilion on May 12, 2011 in San Jose, California.  (Photo by Ezra Shaw/Getty Images)

It's been a long time since we've had a game involving Eatern Conference teams as both the Bruins and Lightning swept their way through the semi-final round. For Boston, their success begins (and maybe ends) with Tim Thomas. The goalie without a style and likely Vezina winner completely stymied the Flyers through four games. If Timmy is on his game, it's just about impossible to score, so that's a nice bonus.

Offensively, a healthy David Krecji was the best forward against the Flyers. Milan Lucic is your agitator/power forward to watch and Michael Ryder seems to have refound his scoring touch. Lest we forget, the Bruins employ defensive giant Zdeno Chara, he of the possibly illegal hits into stanchions and 105+ MPH slap shot.

Meanwhile, the Lightning employ an aggressive and unique offensive system that's not quite a trap, but also does a good job of making opposing teams struggle to gain zone entry. They are relying on an ageless goalie in Dwayne Roloson who was plucked from the Islanders midway through the year and has been stellar this postseason.

Offensively, pocket rocket Martin St. Louis has been the leader for Tampa Bay and Steven Stamkos seems to have found his groove again. They are a tenacious team and have a healthy roster full of roll players that chime in timely goals like Ted Purcell, Simon Gagne and Dominic Moore. The blueline is a motley crew of guys like Pavel Kubina, Victor Hedman and Eric Brewer who may not all be big names, but they're pretty effective.

It pains me to say it, but I think Timmy Thomas is to locked in right now and that spells bad news for any team coming against him.  Bruins in 7. 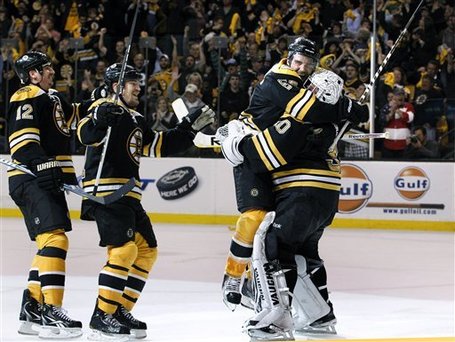