I am a fan of cycling because of Lance Armstrong. Like many American sports fans, it was Armstrong's run of Tour de France victories that hooked me on the sport and the July race is now a huge part of my summer calendar. I literally could watch six hours of live coverage per day. 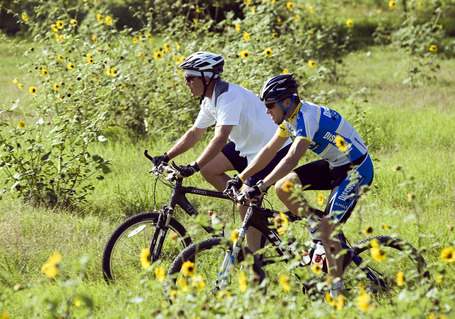 The Feds came at Barry Bonds and eventually nailed him with obstruction of justice but the case against Armstrong could be much more serious. The AP is reporting that the investigators are building a case around conspiracy and fraud against Armstrong and his US Postal team that received government sponsorship during it's 1996-2004 run.

Allegations about Armstrong's use of performance enhancing drugs have swirled for years but took on added life when former teammates Floyd Landis and Yaroslav Popovych started talking about the doping allegations. Landis himself was stripped of his 2006 Tour de France victory due to a positive test for banned substances.

According to the AP report, the investigation has recently gone to another level:

The U.S. request to the French is one of the most recent developments in the case, which has also been progressing in the United States, Italy and other European countries, with investigators seeking phone and bank records, along with statements from dozens of witnesses who have had contact with Armstrong over the years.

There are very few American athletes that reached the level of universal appeal and support that Lance Armstrong won. The combination of this seven straight Tour de France victories and his own fight against cancer put him on a whole other level of fame that far surpassed the minor sport of cycling.

If the federal investigation manages to bring Armstrong down, it would be the biggest performance enhancing drug related fall from grace we've seen in sports.