The Preakness Stakes at Pimlico is held each year on the third Saturday in May. It's been that way since 1930. Now the good folks running the Preakness are considering moving the race to Sunday in order to generate additional revenue.

Mike Rogers, vice president of racing and gaming for MI Developments who owns the Maryland Jockey Club, sees the success a similar move had at another big race and wants in on the action. According to a story in the Thoroughbred Times, the Florida Derby saw it's weekend attendance hit a new high and most importantly, the revenue increased.

Moving the Preakness to Sunday could have a similar effect by allowing the Black-Eyed Susan Stakes to slide up from Friday to Saturday.

"We were trying to create a big weekend [at Gulfstream], rather than just one big day," Rogers said. "It worked out well. It's worth talking about for the Preakness, and we'll see what everyone says."

The move will reportedly be considered for the 2012 Preakness. This year the race will still be run on Saturday, May 21. 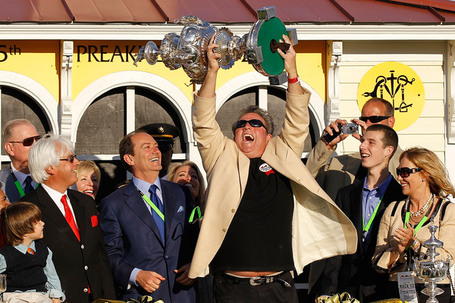 BALTIMORE - MAY 15: Owner Michael Pegram celebrates in the winners circle after his horse Lookin at Lucky wins the 135th Preakness Stakes at Pimlico Race Course on May 15, 2010 in Baltimore, Maryland. (Photo by Matthew Stockman/Getty Images)