NBA Playoffs: Rooting For The Miami Heat (Soul For Sale)

Share All sharing options for: NBA Playoffs: Rooting For The Miami Heat (Soul For Sale)

On a July day last summer, LeBron James, Dwyane Wade, and Chris Bosh condemned themselves and their team to a what would seem to be a lifetime of criticism and hatred. Fans and experts alike have tabbed them as everything that is wrong with the game of basketball and some sort of evil empire that, if not stopped, will take over the galaxy and probably blow up Alderran with their Death Star (need a fact check on that one).

The world delighted when they started the season slow and enjoyed the amount of discord you'd typically expect when you're trying to mesh three superstars and a bunch of crappy role players in a couple months. As you know, Miami righted their ship and got themselves the second seed in the Eastern Conference and in the playoffs, they are still universally hated.

I understand the Heat hate, I really do. When you shame an entire city on national TV like LeBron or hold a giant pep rally for yourselves (complete with smoke machines) like Miami did days after the signings, you invite hate. Hell, I'll even admit that I've had periods of Heat hate myself. But the thing I'm having a real tough time reconciling in all of this is people suggesting teams like the Lakers, Celtics, and Bulls as reasonable alternatives. In fact, it's mind-numbing to me.

For anyone thinking the Heat are worse than the Lakers or Celtics, I invite you to remember that those two franchises have appeared in a combined 52 NBA Finals. Do you know how many total NBA Finals apperances were out there? 128. That means those teams have made 40.6% of ALL NBA Finals appearances. I'm supposed to root for them because a few assholes jumped up and down on a platform? 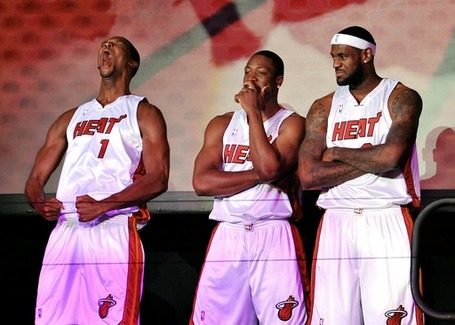 MIAMI - JULY 09: Chris Bosh #1 Dwyane Wade #3 and LeBron James #6 of the Miami Heat are introduced to fans during a welcome party at American Airlines Arena on July 9 2010 in Miami Florida. (Photo by Doug Benc/Getty Images)

If you want to get more current and talk about the guys currently on each roster, then I'll point you to the multiple TV appearances made by Kobe Bryant (Modern Family comes to mind first) and, for the Celtics, remember the Sportscenter commercials their "Big 3" did? Dudes weren't exactly invisible.

Others want to get all cute and say they are rooting for the Bulls because they like Derrick Rose or some BS like that. Well Seth Pollack covers the Rose hate pretty well, but from a historical perspective, how short is your memory? Guess who has won the most NBA Championships in the last 20 years? Hint: it's not the Lakers. I will not be rooting alongside a fanbase that has claimed six titles in the lifetime of a college sophomore.

Fortunately, the Lakers are gone and the Celtics are on the brink of extinction, so who's left?

What does that leave me with? You guessed it: the Miami Heat. Throw all the stones you want, but whatever. Go Heat.

Don't hate because the Heat are cooler than you. 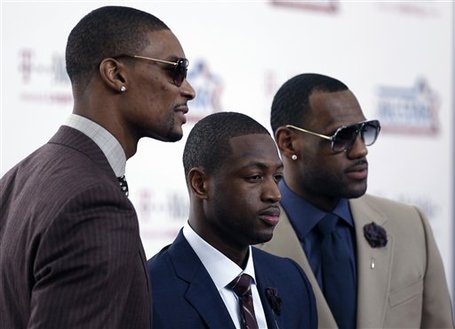