ASU Baseball: A Night Of College Baseball In Tempe

Share All sharing options for: ASU Baseball: A Night Of College Baseball In Tempe

Saturday night, I joined a group of fellow University of Oregon alumni for some wings at Buffalo WIld Wings and college baseball between the Ducks and Arizona State at Packard Stadium.

Looking back on a long career in sports writing, I'd never been to a college baseball game. Oregon didn't have a team when I was there, and I was once offered the P.A. announcer job for Portland State games as a senior in high school, but in all honesty, I don't have a great voice for it. I'm just not a loud talker and I don't have James Earl Jones/Darth Vader's pipes.

Packard is a nice place for a college stadium. I was also pretty impressed with the size of the crowd, and even though there were probably a couple of hundred Duck fans in attendance, I could see that there is a pretty dedicated following for the Devils baseball program.

The Ducks aren't a bad team, but the Devils were clearly the better club on this night. They made all the routine plays on defense and a few difficult ones, got a couple of timely hits and overcame some shoddy baserunning to win 3-1. And they can pitch. 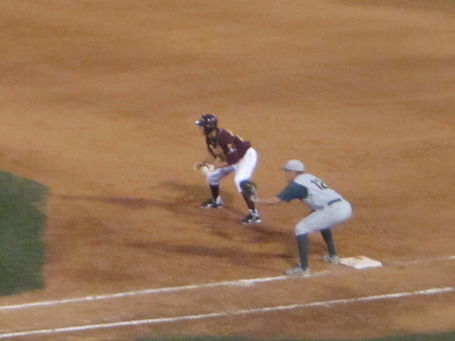 Kramer Champlin was rolling for eight innings. The Sun Devils starter allowed a run on five hits and struck out seven. With pitching like that and a solo homer from Andrew Aplin, its easy to see why the Devils are a top-10 team.

Oregon also made a couple of errors but could not get it going on offense. It's cool to see the Ducks playing in the Pac-10 (they made the NCAA tournament last year in their second season as a program since the 1970s) but the Devils have that tradition -- I noticed the names on the fences in the outfield -- and they play with confidence.

The dance-off between the Chik-Fil-A Cow and Sparky was fun. Sparky did the Dougie John Wall-style but lost on fan applause to the cow, who tried some kind of techno dance with arms and legs.

By my "chicken scratch" scorekeeping, as a friend called the marks on my scorecard, the Devils' first two hitters, Johnny Ruettiger and Zack MacPhee, got on base three times each. Aplin was the No. 9 hitter and had two hits scored twice.

The Ducks quite honestly don't have the recruiting base that the Sun Devils do. I mean, everyone who plays the game pretty much plays baseball year-round down here, so you have to be an exceptional player to land an ASU scholarship. I'm not sure how Oregon will ever get there with the weather up in the Northwest and the fact that the Ducks are a football school more than anything else.

I'll go back next season when Oregon returns to Tempe. Or maybe sooner for an NCAA regional, provided it isn't too hot outside. Overall, it was a good time among friends and true fans, and the evening breeze helped out. 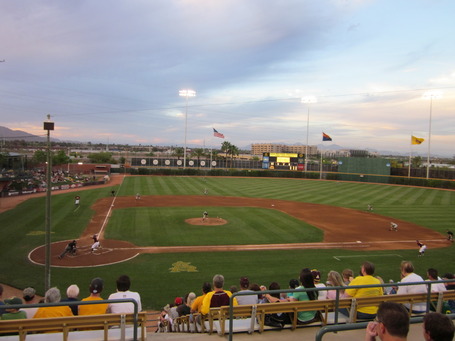