Getting swept from the playoffs, however, did not seem like a good reason to shave.

Many hockey fans probably just shifted the allegiance of their playoff beards to another team. But I don't really like hockey enough to have another team, so as of today, Day 15 of the Playoff Beard, I am officially dedicating my facial hair to keeping the Coyotes in Glendale.

While hockey isn't in my top 10 favorite sports, I did grow up in Glendale and I don't want to see my hometown get screwed by a bunch of flesh-eating fish supporting "watchdogs".

And while there was a time when I would have been sympathetic to the wishes and dreams of hockey fans from Western Canada, the obnoxious nature of their Goldwater Institute cheer leading has created an international case of the red ass that won't be resolved over a bottle of crappy Labatt Blue.

So the beard stays until the Coyotes ownership situation is finally resolved and the team is permanently housed where they belong, in Glendale, AZ.

Here's the progress of the beard. Pretty shabby if you ask me. 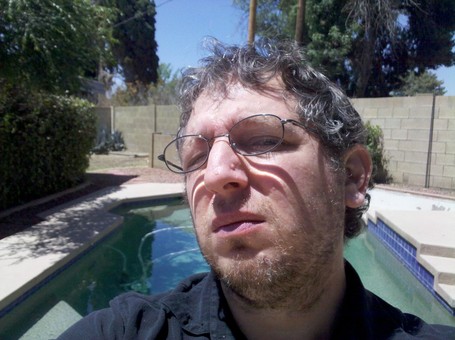 Canadians, please take note of the blue sky and swimming pool. These are among the many reasons why Coyotes hockey players have no desire to move to where you are, even the ones who are from where you are. And no, you can't have Steve Nash back either.