SB Nation's Mocking the Draft blog, had the opportunity recently to speak with many of the prospects who will likely be selected in Thursday's NFL Draft. Included in the media availability that was part of the NFL's Play 60 event were Patrick Peterson and Von Miller. Both guys are frequently listed on Mock Draft boards as going to the Arizona Cardinals with their 5th pick. Cam Newton was at the event as well, but mysteriously was not made available for questions.

Von Miller told of being in the courtroom when the recent Brady v. NFL case was announced. Miller is the only rookie listed as a plaintiff in the case. He said the decision gave him "goosebumps". Miller is obviously a Dallas Cowboys fan. He said he wouldn't be disappointed not to go in the top five as long as the Cowboys took him at no. 9. If Dallas passes on him, he wants the Redskins to take him at no. 10 so he can "beat up on" the Cowboys twice per season for passing on him.

Patrick Peterson, the star cornerback from LSU, said he models his "swag" after Deion Sanders. As good as he might be, that kind of "swag" likely wouldn't go over very well with coach Ken "Plain Vanilla" Whisenhunt. Peterson said he would not be disappointed if he were not picked first in the NFL Draft. No word if he would be disappointed at coming to the Cardinals. 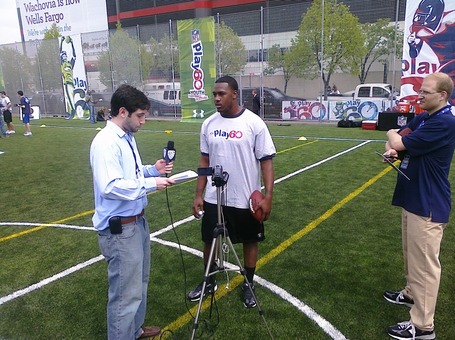 The Mock Draft Projections Are All In, Will They Measure Up To The Real Thing?