There is no such award for MVP of the NBA Playoffs and if there were, it certainly wouldn't be given out before the first round is even complete. That won't stop us from speculating on who the current leader is for that fictional award and our choice for the leader isn't Derrick Rose, LeBron James, Kevin Durant or Dwight Howard. Chris Paul has been absolutely incredible in five games leading his Hornets team against the mighty Los Angeles Lakers.

This isn't to say that Rose hasn't played fantastic as well. All the young Bulls' point guard has done is average 27.6 points per game along with six assists and 4.6 rebounds. Most importantly, he's taken over and won games late in the fourth quarter and as Kobe Bryant fans (and haters) well know, that's a recipe for attention.

Rose is also only shooting 37.1 percent from the field, however, and 21.6 percent from three. His team won their first round series against an inferior Pacer's opponent but Derrick is also playing with the league's best defense and a cast of characters much stronger than Paul's Hornets. 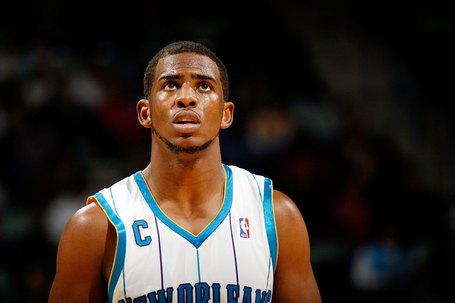 James is has been surprisingly quiet in the playoffs. His numbers are still there (26.3 points, 10.8 rebounds, 5.8 assists) but the attention seems to have shifted away from the Miami Heat star. LeBron's playoff numbers are down from years past when he was the only option on his Cleveland team. Now as a "Big Three" member, his stats and attention are shared with Dwyane Wade and Chris Bosh.

Two other candidates at the early turn for NBA Playoff MVP are Kevin Durant and Dwight Howard.

Durant is averaging just over 30 points per game and yet is still probably deferring to Russell Westbrook too much. Or maybe Westbrook just isn't passing the ball enough. Either way, Durant's performance, while great, doesn't compare to Paul's heroics in pushing the Lakers in what should have been a first-round romp.

Howard's numbers are gaudy as well, 27.4 points and 15.6 rebounds per game, but his Magic team is down 3-2 to the Hawks and Dwight has been shown mostly single-coverage by Atlanta. There's probably not much more Howard could possible do beyond flying around the world fast enough to reverse time so his team could get another shot at those first two games.

My leaders for early NBA Playoff MVP are:

It's great to see Paul playing at the level he has at a few years ago. There were many who questioned his knees and wondered if he still had "it" in him. I think that question's been answered.