Prince William and Kate Middleton will be married on Friday in the biggest royal wedding since Princess Diana married Prince Charles in 1981. One fan of the up-coming nuptials wasn't even born the last time the world stood still to watch the last vestiges of a global monarchy put on a show that has no peer in modern culture.

Sports fans want to pretend the entire royal wedding is simply a distraction from more important things like the NFL Draft. But one athlete, perhaps with too much time on his hands since his team isn't in the playoffs, has caught the bug.

Dudley didn't stop there. He tweeted that he wasn't just going to wake up early to watch the ceremony, he's not going to sleep, lol! 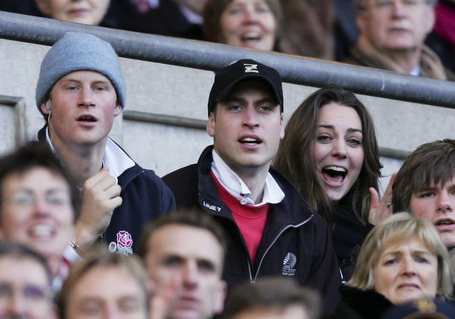 Jared's brave and public steps out of the shadows should be seen as a sign for all the false macho men out there. We know you are watching TLC Royal Wedding features. We know that you are searching for all the information you can get about Kate Middleton's dress.

And like Jared, we know you have strong feelings about that hunk, Prince Harry.

Sports will always be here for you, but a royal wedding only comes along every few decades. In fact, this could very well be the last one if the disappointing trend away from monarchy continues on it's current downward path.

Besides, Kate and William (and Harry) are sports fans!