It's Osweiler's team to run now, with Steven Threet (in photo below) having given up playing because of too many concussions. His stats on a warm Saturday morning at Sun Devil Stadium were impressive, the caveat being that he got them against first- and second-team defensive teammates. 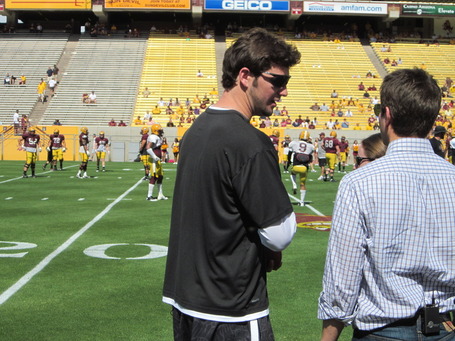 The final score was 83-27, Maroon team over the White, but the scoring was unique. In addition to the normal scoring plays with their standard totals of six, three and one, there was one point awarded for every first down and three more if the offense picked up three first downs on a drive and two points for a play of 30 yards or more. The defense (white team) got two points for a three-and-out, three for a turnover, one for forcing a punt and three more for forcing a three-and-out with punt.

The Devils were without playmaking receiver Mike Willie and running back Deantre Lewis, among others. But enough others on offense made plays. The first play from scrimmage was a pass from running back Jamal Miles to receiver Aaron Plfugrad for a gain of more than 30.

Backup QBs Taylor Kelly (No. 2) and true freshman Mike Bercovici (third QB) split series when Osweiler wasn't in, and got most of their snaps in the second half.

Osweiler drew a couple of defensive offsides penalties and ran well. He threw touchdown passes to George Bell, Pflugrad, and Kyle Middlebrooks, who got some carries as a running back.

On defense, cornerback Alden Darby made a touchdown-saving tackle on Middlebrooks.

The hit of the game went to cornerback Orashon Irabor, who cracked RB James Morrison on his right side near the sideline and laid him out after a short pass. Morrison had to leave the game.

"Defensively we played vanilla. We didn't blitz or anything like that. It's probably as good of performance offensively we've had since I've been the coach here. So that's good. That's a real, real positive," coach Dennis Erickson said.

An estimated crowd of 6,400 attended, one of the largest in the history of the spring game. They saw a fast tempo with fast players on both sides of the ball.

"Finally we're to the level that I wanted speed-wise on both sides of the football," Erickson said. "That's what we've been shooting for recruiting wise. That's where we're at and we'll see what happens this season."

Osweiler said he took confidence from winning the Arizona game last season that carried over into this offseason.

"Defenses are going to have a lot of trouble this year," Osweiler said of his teammates. "They can try to stop one guy or maybe two guys, but we have three or four more to throw at them.  I couldn't be more happy with how the offense came out and performed today. It's a group that has worked their butt off the entire offseason and into spring ball. I'm so proud of those guys and I'm looking forward to the season."