How To Become An NBA Legend: A Look At One Of Today's Hottest Web Games

Have you ever wanted to be an NBA player? NBA Legend, one of the hottest games on the Internet right now, gives you a chance to do just that.

Share All sharing options for: How To Become An NBA Legend: A Look At One Of Today's Hottest Web Games

NBA Legend launched in February on Facebook as the first original, professional sports league game, and it already has more than one million active users. If you haven't already had the pleasure, here's a look at how the game works.

You begin the game by picking a team and a position to play. As a resident of Phoenix, I naturally chose the Phoenix Suns as my team and I settled on point guard after some debate.

Your avatar will have three core skills dependent on the position that you pick. As a point guard, my avatar's core skills were passing, three-point shooting, and perimeter defense. I chose to make my player offensive-minded (you can choose either offense or defense when you select your avatar), so my player's passing and three-point stats were always much higher than my perimeter defense stats. 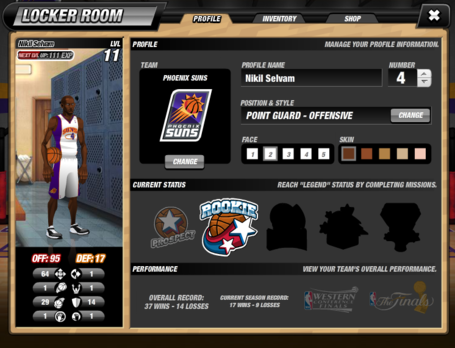 In the beginning, your team consists of your avatar, your team's star player (in my case, Steve Nash) and a bunch of other random players who in all actuality probably don't exist. As you level up, you unlock other actual NBA players on your team. For example, I unlocked Robin Lopez and Marcin Gortat by the time I reached level 8, with Aaron Brooks and Grant Hill coming down the pipes in the following ten levels. I heavily recommend switching these players into your line-up as soon as you get them to replace the no-names.

So what is the point of the game? Your primarily goal, as is the case with most NBA games, is to play through a successful NBA season (after you earn your spot on the team, of course) and win the championship. To do this, you will need to drill and play games.

Drills are time accurate: if you set your avatar to, say, practice shooting threes for four hours at 1 p.m., your avatar will be shooting threes until 5 p.m. that day. The good thing, though, is that you can do other things while your player is drilling, such as play games or complete missions.

Your avatar will continue to drill even if you exit the game, so feel free to log off and come back later to collect the skill boost that you get from completing the drill. I used several four-hour and eight-hour drill sets during the day and tailored my drill schedule around my daily schedule. 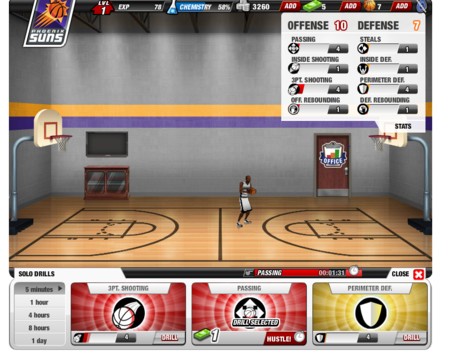 A faster way to level up is to play your team against other teams, and this will allow your avatar and all of the other players on your team to level up together . There are two types of games: exhibition games and NBA season games. Exhibition games are games that you play for fun, possibly to just level up and get experience for your players. NBA season games consist of the actual 82 season games, and your goal is to win 50 of them to qualify for the playoffs.

The game play aspect of NBA Legend has probably been the most criticized because, quite frankly, the game play is simulated.

You do not, unfortunately get to control your avatar or the other members of your team. After choosing which Boosts you want to apply (Boosts are like power-ups that you can use to enhance certain core skills during a game), you get to watch the game simulate your match-up on a nifty little screen for about fifteen seconds.

Some people have been really turned off by this, but it actually isn't that bad. The simulated game play doesn't by any means diminish the joy of winning.

Trust me: snapping a three-game losing streak during the middle of your season with a seven-game win streak against the likes of the Heat, the Mavericks, and the Lakers to put your team back into playoff contention feels pretty darn good, regardless of whether or not the games are simulated. 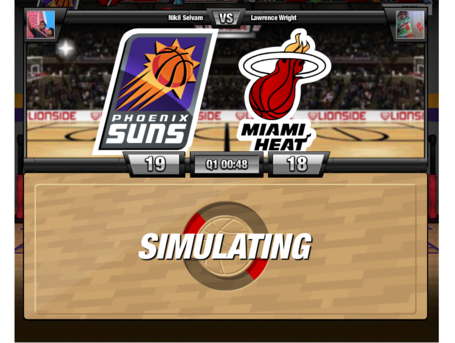 In essence, NBA Legend focuses more on the preparation, on the nitty-gritty life of an NBA basketball player. Beyond just drilling real-time and building chemistry with your teammates, you also get to do other things such as manage your fan base, collect endorsements, and decide which court upgrades/Boosts will be most beneficial to your player.

During my weeklong experience, I really enjoyed playing NBA Legend. I would recommend it to all basketball fans (who have Facebook accounts, of course).

You can click this link to play NBA Legend, or you can find it on Facebook. Practice hard, and good luck to all you budding NBA stars.