Share All sharing options for: Fitz Takes His Cuts In Cage, Won't Quit His Real Job

Let's just say no one on the Arizona Diamondbacks should worry if a star athlete like Larry Fitzgerald will be able to cross over and play in the bigs.

Fitzgerald swung and missed quite a bit in his batting practice stint Tuesday before the Diamondbacks' game against St. Louis. Outfitted in his personalized jersey, the Arizona Cardinals wide receiver stretched out with outfielders Ryan Roberts, Chris Young and Justin Upton, then got in the cage to face batting practice pitches.

The timing was a struggle. He hit a ground ball after several swings and misses or foul tips.

"This is embarrassing, yo," Fitzgerald said between pitches. Manager Kirk Gibson encouraged him and coach Don Baylor offered some tips, then Fitz hit a line drive. 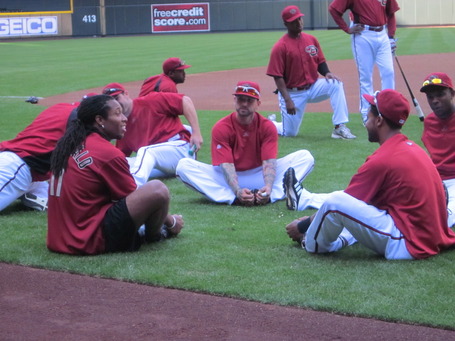 "This is so much harder than it looks on TV," Fitzgerald said. When done, he bowed out of respect to his outfield pals, then sat down in the dugout.

"I'm going to say this right here first. I'm taking this off the list of things I would do if the lockout continues," Fitzgerald said. 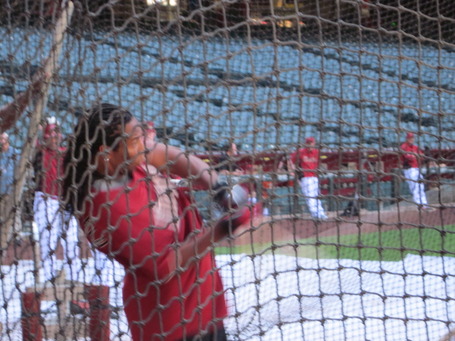 Of course, it was all in good fun, but Fitzgerald was more hopeful of hitting the ball more often.

"This is definitely a gift that I don't possess," he said. "I struck out seven or eight times up there. It was embarrassing with my son watching.

"I didn't think I'd fail that miserably."

"It's tough, I remember how it was," Gibson said. "I played football in college and liked it a lot more than baseball and you can see why. It wasn't really fair. He hasn't practiced and there's shadows, probably a little bit of pressure but he did fine."

Of course, curiosity wasn't the only thing that brought Fitz to Chase Field. He is promoting his Larry Fitzgerald Double Play softball game and comedy show event at Talking Stick Resort April 23. Several NFL players are scheduled to attend (what else do they have to do?).

Asked about the lockout, Fitzgerald, a Twins and D-backs fan, said "it's up to the shirts and ties now to get (a deal) done."

"I'm confident that it will be resolved. I'm not sure when," he said, adding that players are planning workouts on their own.