Major League Soccer Can Succeed In The Valley

Share All sharing options for: Major League Soccer Can Succeed In The Valley

I've heard Arizona referred to as a "no-man's land" of soccer in the U.S., a place devoid of the atmosphere, facilities, interest and enough fans of the beautiful game to ever be awarded a Major League Soccer franchise.

When I got here in February of 2010 and as the long, hot summer dragged on and I found myself longing for beautiful Pacific Northwest summer evenings at Qwest Field covering the Seattle Sounders (my job before I moved to Phoenix), it was hard not to agree.

I went to a furniture store on the west side to see a former Mexican national team player. I went to Grand Canyon University to see the Arizona Sahuaros play on a hot night on a poorly lit field. I began trying to find others who support soccer and want to see it at a higher level here, and there aren't many. Even the World Cup last summer seemed to lack the sizzle and appeal it had in other U.S. markets. I stayed home and watched it.

I believed MLS would not and could not survive in Phoenix. And then, three things happened over the last month or so that totally changed my mind.

The first was the amount of MLS teams that descended upon this state for preseason training and games. It quickly became clear to me, with Vancouver, Portland, Seattle, Kansas City, Real Salt Lake (who already has an academy in Casa Grande), Columbus, the Los Angeles Galaxy, Colorado and the New York Red Bulls -- the teams I saw in January, February and March -- that this area has the number of quality fields to accommodate all of these teams. Reach 11, Grande Sports World and ASU's soccer stadium were in decent shape. The new complex in Avondale by the 101 freeway has a ways to go before it can be included.

If teams want to come here in the winter to train, why couldn't that carry over to a pro team in Arizona?

The second thing that happened was a conversation I recently had with a friend. We talked about soccer briefly, and he said that a Mexican team should be added in Phoenix. Then I thought, did he mean adding a team for the Mexican league, or an MLS team with strong ties to a Mexican club?

The latter makes good sense. It works for Chivas USA in Los Angeles, directly tied to the famous Club Deportivo Chivas de Guadalajara in Mexico. Why couldn't a big Mexican club with a ton of money invest in a team in Phoenix and buy into MLS? Imagine the sponsorship opportunities, the promotions, the multicultural appeal.

There are plenty of Mexican soccer fans here. There is a stadium here that is available from mid-March to August, then certainly a sharing deal could be worked out with the NFL Cardinals just as the Seahawks and Sounders do in Seattle and the Patriots-Revolution in New England. Easier said than done, yes, but with the sheer numbers of Latino fans that live here who watch Mexican soccer on TV every weekend, marketing a club with Mexican ties could be almost as easy as finding good Mexican food in the Valley.

Which brings me to the third event that gave me hope: The match on Tuesday night between Atlas of Mexico and the New York Red Bulls.

The Suns were at home. The Coyotes were across the street playing. Spring training is every day right now. Yet 23,644 people had tickets to the soccer match, and they were undaunted by traffic at the freeway exits to the Westgate area where the stadium and Jobing.com Arena are.

The lower bowl began to fill as fans filed into the stadium and walked down the steps to their seats. They were still coming in well into the first half, and while the lower bowl didn't completely fill up, the crowd by far exceeded my expectations. 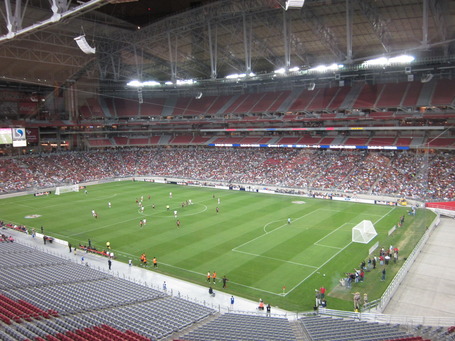 Such a crowd is way above average for an attendance count at a typical MLS game. And if said club had some kind of an appeal and solid financial backing to it, like a Mexican affiliation, perhaps it could get its own soccer-specific stadium that will keep out the intense summer heat and be limited in capacity to no more than 20,000. Because it was clear to me that people will come out for live, big-time soccer.

This match wasn't given the greatest promotion in local mainstream media, and still, it was the highest-attended sporting event in town that night.

And let's be honest here: as much as I wouldn't want to see it, the Coyotes might be gone, if not sooner than later. That would leave a void that an MLS club could easily fill. One last thing - should MLS adopt a CONCACAF schedule, the season would start in August and end in May. That would limit the number of months of intense heat.