This is not your "love tunnel", orange slice, soccer mom fan club. American Outlaws is bringing the passion to USA Soccer. The supporter group for the US Men's National Soccer Team started in 2008 after a few fans were disappointed at the lack of organization they felt the existing Sam's Army showed during the 2006 World Cup in Germany.

President of the Phoenix Chapter of the American Outlaws, Tony Hernandez, wasn't afraid to lay down some smack when we spoke during half time of the recent USA vs. Paraguay friendly.

"If you want to hang around with 45-year-old mothers and little kids going to soccer practice, (Sam's Army) is for you. If you want to get drunk, get loud, sing, and support your country -- American Outlaws is more of the college fraternity feel that a lot of guys and gals want."

Hernandez started the Phoenix Chapter just weeks before the 2010 World Cup. Having watched the final USA match with them during the world's greatest sporting event this past summer, I can personally attest to the passion, cohesion and edge of this merry band of fans. 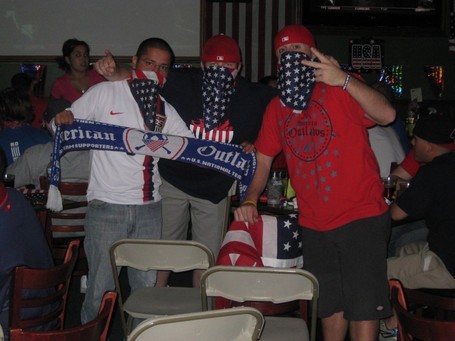 The 16th Street Bar, located between Bethany Home and Glendale on16th street (of course), is the Outlaw's home in Phoenix. Hernandez explained that the bar's owner bent over backwards to accommodate the slightly rambunctious but never destructive crowd.

"There's two kinds of soccer bars in America," Hernandez explained, "There's the American bar that shows the soccer games inside the restroom and then there's the soccer bar that's an English pub, an Irish pub, where the United States isn't even welcome. Sure, they're soccer friendly but they're not USA friendly. This (bar) is the perfect hybrid of both. It's a good old American bar owned by a Liverpoolian."

The Outlaws had a smallish crowd at Tuesday's match against Paraguay but for last Saturday's contest with powerhouse Argentina they out-numbered patrons who came to see the Arizona Wildcats play UConn in the NCAA Elite 8.

The next big event for USA Soccer is the friendly against Spain on June 4 which is followed immediately by the Gold Cup Tournament hosted in various American cities this summer. If you can't make to a live game, you might want to come down to the 16th Street bar and holler at the TV with these rowdies.

You don't have to be a member to show up at an Outlaw event but if you want the T-shirt and American Flag bandanna you can pay your $15 and join the club.

Just don't expect anyone to hand out fruit at half time unless it's a lemon inserted into a glass of beer. 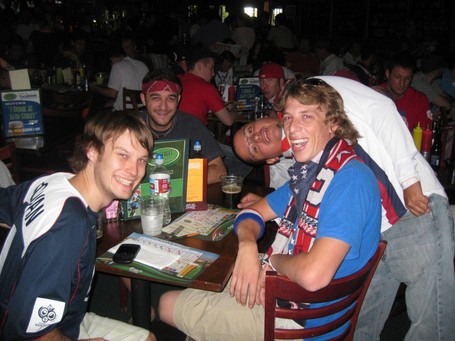