Share All sharing options for: Arizona State Guard Jahii Carson Will Make The Most Of Year Of Ineligibility

TEMPE -- Jahii Carson will spend the rest of this academic year getting going on classes for his chosen major at Arizona State, communications. The freshman guard will also practice with his Sun Devils teammates, perhaps sit on the bench with them in games and attend meetings and study tables with the boys.

He just can't play in games. And that's the hardest part for a player considered one of the top incoming freshmen in the Pac-12.

Carson, ruled academically ineligible by the NCAA Friday, reacted to the verdict handed down by the college sports governing body. He will lose his freshman season and join the Devils as a sophomore next winter, but can earn back the lost year of eligibility if he shows enough progress toward graduating, by NCAA standards.

Carson tried to look on the bright side while admitting the decision was "a little bit deflating." He stepped on the Wells Fargo Arena Court for his first practice Friday afternoon. 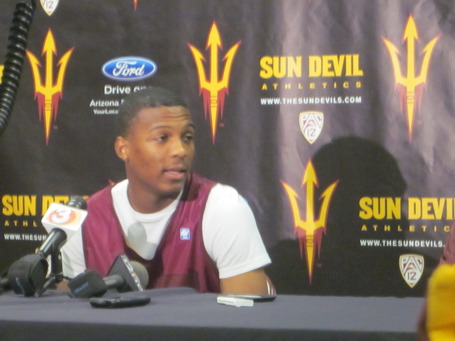 Carson even expressed a little relief at finally knowing where he stands with the NCAA and the ASU program.

"I feel like the monkey's off my back. It's not what I wanted, but it's something I can live with," he said.

The Sun Devils had hoped for a spark from Carson if he was to be declared eligible. They have glaring issues at the point guard position at present and are off to a 3-5 start with three losses at home in the non-conference season.

"We have to go with who we have," ASU coach Herb Sendek said. "He's a talented point guard. He's a tremendous athlete. He can score but he also has the ability to make other guys better. He most certainly signed with us with a great deal of promise."

Sendek said the team will continue to be supportive of Carson, and that he'll make practices more competitive.

"It's really a thunderbolt of good news for us," Sendek said.

For Carson, he's glad to at least be able to practice. The NCAA kept him pretty much in the dark about the decision process, he said.

"I gave my pledge to Coach Sendek and the ASU basketball staff and I was going to stick with that," he said. "I felt like Arizona State was the place for me and juco never came across my mind or leaving Arizona State."

Carson will use the year to learn the system, stay in shape and be ready for next season. He also wants to build leadership among his teammates and said he'll be motivated academically.

"This makes me more hungry," he said. "It makes me want to come out and just dominate. I've always had a little chip on my shoulder so this is an even bigger chip for me."