NBA Lockout Headed For Showdown, Will Greed And Sanity Beat Ego And Pride?

Share All sharing options for: NBA Lockout Headed For Showdown, Will Greed And Sanity Beat Ego And Pride?

The next few days will tell the story of the NBA season. By 5:00 p.m. ET Wednesday, the NBA players will have to decide if they will cave to the owners' ultimatum and end the lockout or if they will react with the same level of pride and ego that's made them big ballers on the court and burn the motherf*%ker down.

If you need to catch up on where things stand, click here. We'll wait for you to finish. Otherwise, when you are fully briefed and up to speed on the "deets" of the "sitch", we'll move on and make this simple point.

The NBA owners started this lockout. Despite the increased popularity and growing revenues the league enjoyed they claimed they weren't making enough money and demanded the players agree to give back.

The owners want guaranteed profits so they can afford to pay back the loans they took out to buy the teams they couldn't afford. They want to be protected from making bad decisions on player contracts.

If you are an NBA player, you can see why that might suck.

Add in the imperious and obnoxious why David Stern has mislead the public and is treating the players like disobedient servants and it's no wonder there is a group of hard line players resisting the pressure to cave.

Unfortunately, due to poor leadership and communication by the union, the players have been backed against a wall. They can fight the man and hope that the pro-business courts in this country someday rule in their favor. Or they can do the smart thing and accept the 50/50 deal and move on before too much more damage is done.

Ironically, since the current offer wouldn't change any existing contracts the financial motivations of the star players is to take the deal. The "greedy" thing for players who recently signed big contracts or have already made a lot of money is to get the paychecks flowing again.

The reason players are opposed to the cuts is on principle. They don't want to take potential earnings away from future players and mostly they don't like getting bullied by a bunch of rich old men. Who can blame them?

But ultimately, enough players will hopefully turn back from the loaded gun of mutually assured destruction and see the wisdom of taking the deal. If they enough players take the high road, by the end of this week the NBA lockout will be over.

If not, hard liners on both sides will soon set the NBA burning in the hot flames of stupidity. 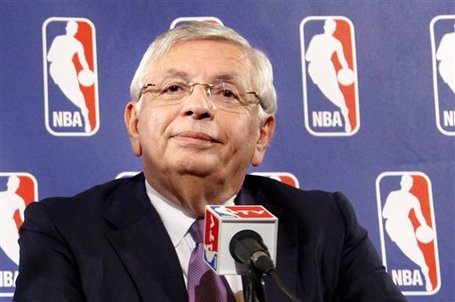