Detailed analysis of NBA salaries over the last five years as compared to team wins and playoff appearances. Not surprisingly, the more teams spend the more they win. The NBA wants to level that gap while the players are willing to blow up the season to avoid it.

The NBA lockout has reached a critical juncture. The owners revised their proposal and issued another ultimatum and the players meet to discuss their options and in the end decided to fight it out in court. You probably know all that already and if you need to get caught up on the details and latest on the labor situation, go here.

Prior to the blow up, the players had already agreed to a 50/50 split of revenue with the NBA and claim that their objection to the latest proposal was over freedom of movement issues. They new deal would have made it (slightly) more difficult for some free agents to choose their teams.

This fundamental disagreement about which players get paid and by which teams is why the league is facing a lost season. It's completely ridiculous but that's where it is.

So while the league and players will now be spending some quality time in courts of law, we still wanted to explore the key issue that is fundamentally separating the two sides.

The owners insist that they need to level the playing field between all 30 teams so the big markets teams (or those with deep pockets) can't continually outspend the rest of the league. They believe that more equal spending will give more teams the chance to be competitive.

The history is clearly on the owners side.

We looked at salary data (via Shamsports.com) for the entire league for the last five years and found a clear correlation between spending and winning. The numbers also show a large gap between a few wealthy teams and the rest of the league.

Here's what the numbers show.

Over the last five years combined, eleven teams had an average payroll over the luxury tax. Several teams bounced over and under the tax line like the Phoenix Suns who paid the tax two out of the last five years. Here's some key points about spending. 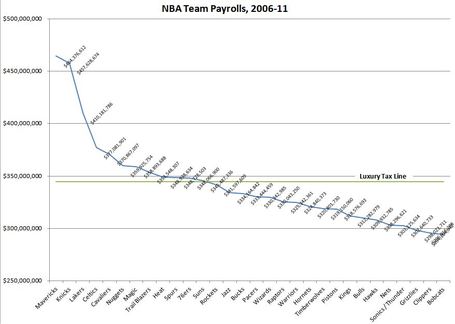 We tallied the total wins for each team over the last fives years and ranked them. We then compared this to teams based on payroll. The chart below shows the correlation between the two. 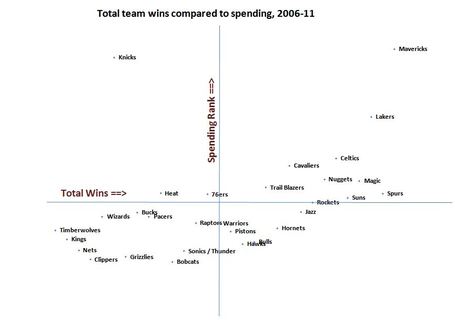 Here's another chart looking at spending and winning. This chart simply plots the ranked order of teams for both total wins and total spending over a five year period. The linear trend line for wins closely matches the spending line and certainly shows the relationship between spending and winning for the NBA over the last five years. 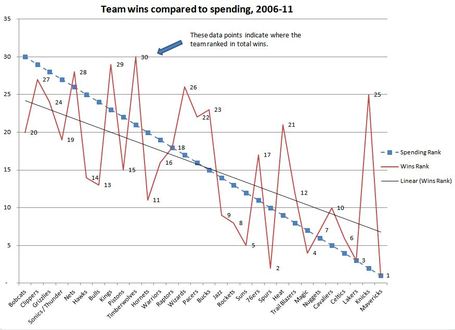 We totaled these playoff appearance "points" and compared them to spending rank in the chart below. 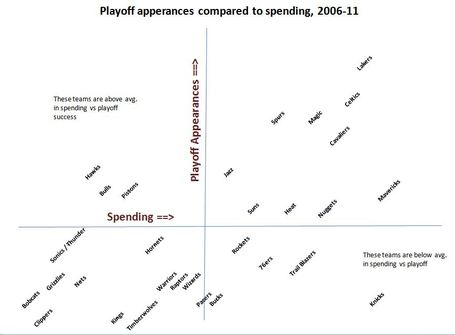 Does all this mean anything? Probably not.

The players rejected the owners' proposal and threw the lockout to the courts where we will likely see months of battles leading, hopefully, to an eventual resolution.

The point for fans is this: The players are opposed to limits on team spending even though the players as a group are guaranteed to always get their share of total revenue. If the top end of the spending comes down and the bottom end of spending goes up (as was part of the previous offer) the salaries should be compressed towards the middle.

Individual players might be losers in that scenario but other players would also benefit. Once the BRI agreement was reached, it stopped being about player vs. owner and become player vs. player.

For fans of teams outside the biggest spending markets, the higher luxury tax and limits on tax paying teams acquiring more and more talent (as the Mavs did when they spent their way to a title) would be a good thing.

The talent level would be more evenly distributed which would make the league more competitive. More, better teams means a strong league which leads to more revenue for the NBA to split with the players.

David Stern is a lot of things (condescending tyrant comes to mind), but under his watch the league has dramatically expanded it's popularity which earned the players a lot of money over the past decade. There's no reason to think that his plan for spreading the talent across the league is anything more than a good idea for everyone outside the biggest three or four markets.

For the players to destroy the season and risk permanent damage to the league so a very small number of players can pick to live in Miami instead of Milwaukee is an entirely different lunacy.