The Phoenix Monsoon of PASL Pro indoor soccer split their first two games in franchise history with Revolucion Tijuana over the weekend in Avondale.

Weekend No. 1 in the history of the new local pro indoor soccer team, the Phoenix Monsoon, is in the books. The home team won a thriller in overtime, 5-4, on Saturday, and lost 6-5 Sunday afternoon to Revolucion Tijuana. The Monsoon drew about 600 fans over the two game dates at the American Sports Center in Avondale, going up against a Cardinals NFL game and a NASCAR race just up the road at Phoenix International Raceway.

Sunday's game got off to an auspicious start. The Tijuana club didn't show up until 12:32 p.m., two minutes after scheduled kickoff and needed time to warm up. The game officially began at 12:54 and ended less than two hours later.

The arena is a newer facility and the game was played on one of two surfaces in a large area that had bleacher seating and high tables and chairs on one side of the the pitch. The table seating was right on the plexiglass boards that separated field and seats.

Tickets were generally $10 or $20 dollars. T-shirts -- the Monsoon has nice red and black ones with the team logo -- were on sale two for $25. The Monsoon debuted their white uniforms after wearing red ones in the opener. 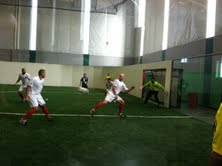 There were four 15-minute periods with a halftime, and the action was fast, even bone-jarring at times.

Revolucion took a 1-0 lead but the Monsoon tied it on a goal by Joshua Ademusu with 4:40 left in the first period.

David Fewkes started the game as goalkeeper and was peppered with shots but held his own until midway through third quarter, when he was replaced by Oscar Dautt.

A corner kick -- hard to imagine on an oval-shaped turf pitch -- by Ryan Hays turned into an assist to Matt Marcum for a blistering shot and goal with 25 seconds left in the period.

Phoenix went up 3-1 but the turning point of the game came with 9:55 left in the second. Tijuana scored when the Monsoon were caught trying to make mass substitutions, which are done on the fly in this sport. Too many Monsoon players were caught barely leaving the bench and there were not enough defenders to stop a goal from being scored.

Revolucion began to take over, controlling the attack and generating more chances. It was 3-3 at halftime. 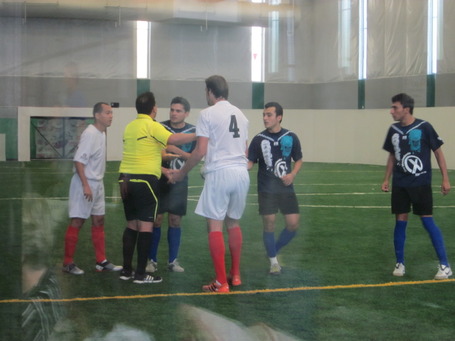 Down 4-3 in the third, Phoenix had three good chances saved with a matter of seconds. Tijuana went up 5-3 with 1:58 left in the third.

Davey Lopez made it 5-4 when he scored on a free kick , but the Monsoon trailed 6-4 throughout half the fourth period. With 6:10 left, Alex Dom, the team captain, scored to cut the lead to one.

The Monsoon tried for the equalizer but couldn't put one in, and the game ended in a loss.

Coach Luis Dabo noted that the Tijuana club has players who have played together for a long time while the Monsoon were barely formed late last week.

"Much more," Dabo said when asked if his team showed him more than he expected over the weekend. "A lot of mental errors. Now they know they have to do things with quality. They worked hard and they fought hard. It's going to take time for us to get to the point where we're winning by four, five, six goals."

Armando Lara, a former Phoenix Bourgade Catholic and Phoenix College player, was just glad to play in front of a crowd.

"I think we did rather well. Got unlucky on our subs, I think that's the one thing we have to work on," Lara said. "Getting all these people out cheering you... I didn't think this many people would be coming out but I think they're happy with what we've been doing."

Lara was working, going to school and playing in Sunday recreational and indoor leagues before he was asked to try out for the Monsoon.

"Hopefully this is my next step to something bigger," Lara said. "Hopefully we do great this season and keep growing, making this franchise big."

The overall product and gameday atmosphere needs refinement, like anything new, but the game is fast and the action is good. Shots are very hard and at close range and players take a pounding trying to block them, especially goalkeepers. Players can get knocked up against the plexiglass, just like in hockey. Monsoon soccer is intense and for the most part, entertaining. And the players appreciate the support -- they walked toward the crowd after the game and applauded it in gratitude immediately after the game.