The Phoenix Monsoon hope to provide a relatively inexpensive and action-packed product for Valley sports fans this winter.

Tuesday night was a chilly one in North Phoenix, but it wasn't enough to cool the spirits and motors of 36 players competing for 16 available spots on the inaugural Phoenix Monsoon indoor soccer roster.

By the light of the moon -- and some poorly functioning floodlights around the outside of a walled artificial turf field -- the players got in their final practice before coach Luis Dabo and his assistants make their final decisions. 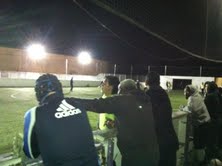 Nearby, owner/general manager/bringer of bottled water for the players Stuart Starky -- a school principal during the day -- was still hashing out some details in the days leading up to the first game in team history, this Saturday at the American Sports Center in Avondale. The team had to change venues due to water damage at the Castle Sports Club, and Starky still had to negotiate a business deal with the Avondale site in order to hold practices and games.

There is also a pending announcement on the future of an outdoor Phoenix Monsoon season that would start next year. But Starky wouldn't give details.

As for the indoor team, there is a coaching staff. There are uniforms. There is a place to play. There will be players -- students and working professionals during the day, some locals, some from Africa, Brazil and Mexico  -- and they will make a guaranteed $100 a game.

The Monsoon will compete in the Professional Arena Soccer League (PASL) Pro League with teams from California (including the mainstay of indoor soccer, the San Diego Sockers), the Pacific Northwest and the Midwest. Its first opponent is a team from Mexico, Revolucion Tijuana, on Saturday night and Sunday afternoon.

"We didn't let it die," Starky said, mentioning business partner Adrian Quintero, "and we vowed we would play a game and for all the physical and emotional abuse, we're about to live up to that promise. Where it goes from there, I don't know, but we're about to kick the ball."

The Monsoon hoped to play in the old Veterans Memorial Coliseum, but rent was too expensive. Now Starky is looking at the Phoenix Greyhound Park, which has been empty for almost two years.

The plan is to put an indoor pitch down and surround it with bleachers during the colder months, then remove that and play on the natural turf in the hotter season. But that has yet to make it through the political process.

Indoor soccer is like hockey in many ways. Formations are typically 2-1-2 or 2-2-1, says Dabo, meaning two defenders, a midfielder and two forwards or one defender, two midfielders and two forwards. That doesn't include the goalkeeper.

The action is up and down and fast-paced -- the sport is called futból rápido in Mexico -- and there can be low double digits per team in goals and many more in shots. There are red cards and yellow cards, but also blue cards -- that means two minutes in a penalty box and a man-advantage power play for one team.

Substitutions are made on the fly, players running off the turf and into their bench area through on door and sprinting back on through another door.

"It's hockey with a ball," Dago said.

The Monsoon added a seasoned veteran keeper in Oscar Dautt to their camp, and it would be a surprise if Dautt, with 11 seasons of experience in Mexico and at one time considered one of the top young goalkeepers in the soccer-mad nation, is not the starter when the season opens. That's Dautt directing traffic in the photo below: 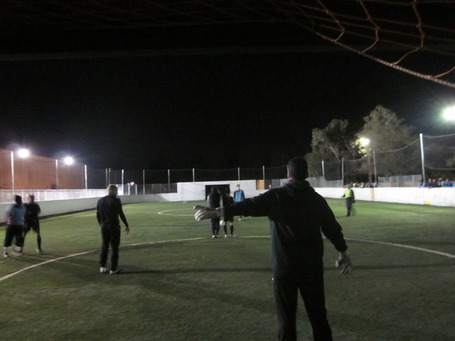 Dautt, 35, played in the Mexican First Division but came to Arizona to be with his family.

"I wanted to come here to be a part of this with Luis. We have a good friendship," Dautt said. "That gave me the inclination to keep playing."