With a sellout crowd of 14,000 fans in attendance, Arizona's Red-Blue Game was a special event on Saturday afternoon. Here is a recap of the festivities and the scrimmage:

Chase Budinger, Jordan Hill, Andre Iguodala, Richard Jefferson, Derrick Williams and Jason Terry were all honored, among others. Every former Wildcat received a huge ovation, with the roof nearly coming off as Williams was announced.

Once the NBA stars came onto the floor, the 2011-2012 Arizona Wildcats were announced. Here is a video of the introductions:

Once the players were announced and warmed up, five players entered the dunk contest: Brendon Lavender, Angelo Chol, Kyle Fogg, Solomon Hill and Nick Johnson. Despite some pretty sweet dunks from every participant, it was the freshman Nick Johnson who won the contest. He earned the nickname "Bunnies" in high school and UA fans quickly learned why on Saturday.

SB Nation Arizona said on Friday that UA would be receiving a court-size banner at the Red-Blue Game. The school unveiled it and it was awesome. Only a few programs in the nation have a similar banner.

Here is my -- ahem -- amateur photograph of the sign: 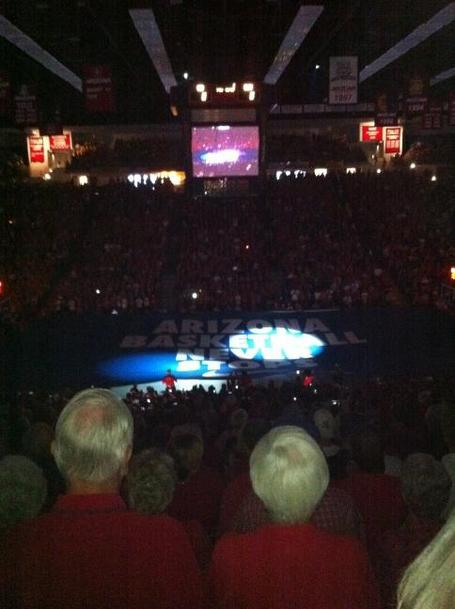 And no, that is not Lute Olson sitting in front of me.

Chase Budinger and Derrick Williams both received framed jerseys and their names were put into the Ring of Honor, which sits above the court.

At halftime, Jason Terry, who was a member of Arizona's 1997 championship team, was honored for winning a championship with the Dallas Mavericks. He was accompanied with his family and wore an awesome half white/half blue jersey with his famous knee-high socks.

Josiah Turner looked like how most would expect a true freshman point guard to look. His passes were crisp and his ability to push the offense was impressive. His jump shot will continue to improve over the year, as will his decision making. He's going to be a good one, folks.

One of the most impressive performances came from Nick Johnson. He started off the game with a bang with an incredible one hand put-back dunk and hit three 3-pointers on the day. His defense was as good as advertised and he even ran point guard for a while. He may not start to begin the season, but Johnson is going to be an absolute stud.

Angelo Chol hit a few jumpers and looked solid around the basket. His presence was felt on the defensive end with multiple blocks, though he will need to bulk up to stop larger post players.

Sidiki Johnson was very impressive and was the best post player on the floor. He ended with a team-high 18 points and did not miss a single one of his seven shots. Not known for his shooting in high school, the big man even hit two 3-pointers. Conditioning, avoiding foul trouble and free throws are still something to improve on, but Johnson surpassed all expectations today.

As the only returning point guard on the roster, Jordin Mayes looked like the player that earned him a ton of playing time last season. He pushed the offensive tempo, hit open teammates with a pass and made quite a few jumpers. He showed no signs of struggle with his surgically repaired foot.

Kyle Fogg was his usual self at the Red-Blue Game; he scored the ball, played stellar defense and delivered smooth passes time and time again. Brendon Lavender was on fire from behind the arc and really looks like a man determined to have a big senior season. Consistency has always been the issue with B-Lav, but his jump shot looked smooth on Saturday.

Solomon Hill continued to impress on both sides of the ball and is in the best shape of his career. He will be counted on throughout the season to be a leader and looks primed to have a breakout year in 2011-2012.

A player who many feel is the key to this season, Kyryl Natyazhko finished with 13 points, five rebounds and about three million fouls. If he can avoid foul trouble, he appears to be Arizona's starting center to begin the season. Practice and scrimmages have never been an issue for Natyazhko, though.

Jesse Perry was excellent on both sides of the floor and will likely lead the team in rebounding. He scored around the basket, with his midrange jumper and hit three 3-pointers. For a player who was pretty unheralded in junior college, Perry looks primed for a big senior season.

Finally, Kevin Parrom was dressed out, but he did not participate in the scrimmage. Sean Miller suggested after the game that Parrom would not redshirt this year, but he would miss at least the first few games of the season.

It was an incredible atmosphere today and the many recruits in attendance had to come away very impressed. The team played well and UA fans have to be excited for the season to begin.

Arizona will play two exhibition games before starting the regular season on November 7. The first exhibition game will be played Thursday night at 6 p.m. against Seattle Pacific University.