Seven fights are on the card, an extravaganza of up-and-coming boxing talent in an event that is helping put Phoenix back on the boxing world map. The main event features a fighter previously featured  on this website, Emilio "Milo Time" Colon-Garcia.

Milo Time is off to a good start as a professional -- he's 4-0 according to information about the fight card from Face to Face Events, the promotion company, but 3-0-1 with a draw according to boxrec.com -- and should win this fight against the 0-5-1 Armendarez. Colon-Garcia (on the left in photo) is undoubtedly the fan's choice, judging by the cheers for him at the weigh-in. 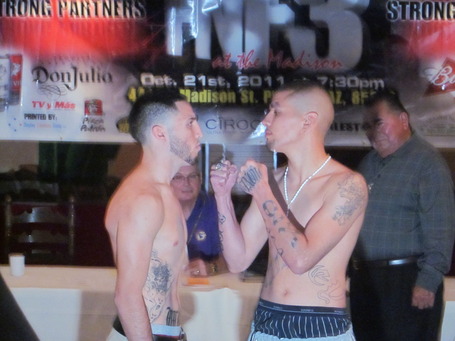 The co-main event features Carlos Luque and Victor "El Niño" Castro in a matchup of 135-pound fighters. Luque, of Tucson, fought in June on a card at Wild Horse Pass Casino. Castro is 3-0 and fought on the last FNF card in July.

Should be a lot of excitement  and entertainment in an intimate atmosphere.

Tickets are still on sale at several area Pizza Patrón locations and at the door, $30 general admission, $50 ringside.