The Arizona Wildcats have released the official team post for the 2011-2012 team. Here is a look at it: 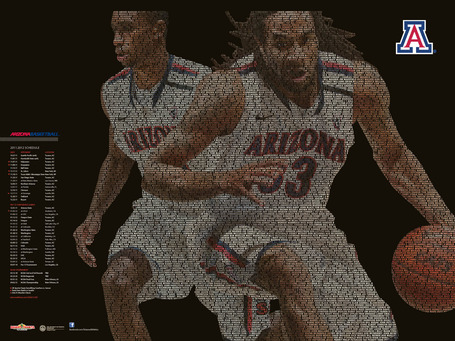 It may be tough to see from the screen of a computer, but those are not just lines on Kyle Fogg and Jesse Perry. Instead, the program incorporated names from players both past and present. Everyone from Steve Kerr to Max Wiepking can be found on the poster, which is pretty cool. These posters will be made available at the Red-Blue Game, which will be played October 22, as well as the team store.

Arizona basketball also released a promotional video of sorts giving fans information on how to purchase tickets. Here is the video:

Towards the end of the video, a fast list of accomplishments are displayed. Here they are:

For more on the Wildcats, check out AZ Desert Swarm.