If Auburn has a defensive star, its 6-5, 298-pound defensive lineman Nick Fairley.

The big man set Auburn's school record for single-season tackles for loss with 21 in 2010. He's also a half-sack away from tying the school career record. 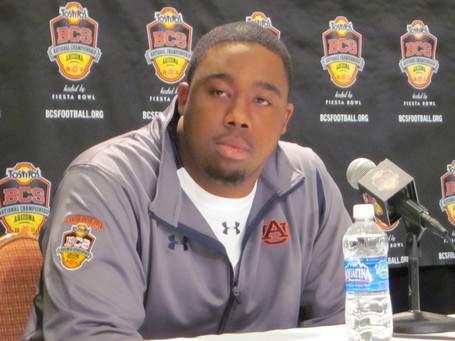 The Lombardi Award winner (nation's best lineman) is looking to squish some Ducks on Monday.

"It's getting closer and closer, that's all I've got to say," Fairley said Thursday. "Hopefully their running backs will pat their feet a couple of times, don't get downhill too fast so our linebackers can come in and fill the gaps and make a lot of plays."

Fairley was asked if he could compare the Ducks to any SEC team the Tigers faced this season.

"Our offense in practice," he said.

Someone else asked Fairley about his supposed reputation as a dirty player.

"I'm a hard worker. My motor's always running," he responded.

Fairley will be on the Ducks' minds.

" Can't get discouraged. He's going to make plays," Oregon center Jordan Holmes said. "He's a playmaker. That's what they do... hopefully everything will work out."

The Tigers, meanwhile, are like the Ducks in that defense is not what they're known for. There seemed to a prevailing sentiment among the media that Ducks are going to be able to use their breakneck, non-stop tempo with effectiveness against Auburn, which has struggled on defense early in games.

"You can't change your approach to the game. You have to stay consistent with what you've been doing," running back LaMichael James said. "If you look at this game bigger than any other game, then we're probably going to lose." 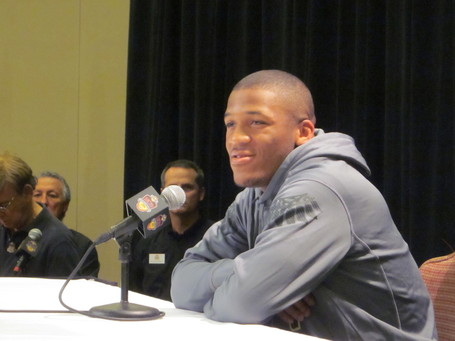 James was a finalist for the Heisman Trophy who is clearly happy with his coach. He's coming back to Oregon next season and skipping the NFL draft.

"He's a great mentor for me," James said of head coach Chip Kelly. "I think I would mean as much to him even if I didn't play football."

James said top running back recruits like Oregon because of the speed of the offense and the stability of the coaching staff. Running backs coach Gary Campbell has been at Oregon for 28 seasons and has been like a father figure for his players. Running game coordinator Steve Greatwood has been at UO 25 seasons in various coaching capacities.