Tigers' Offense, Ducks "D" Get Their Day In Spotlight

Share All sharing options for: Tigers' Offense, Ducks "D" Get Their Day In Spotlight

Wednesday was the day Auburn quarterback Cam Newton, the Heisman Trophy winner, sat before the hordes of reporters (and perhaps a few non-reporters) in a media free-for-all.

Newton was surrounded and bombarded with questions for a solid half-hour but answered everything coolly and calmly, unless you count the time he slipped and called Oregon "Doregon."

An ode to Homer Simpson perhaps. At least it wasn't "Boregon," or heaven forbid for those of us who are Oregon natives, "O-ree-gone." We hate that. Got it, ESPN talking heads outside of the College GameDay crew that makes the trip to Eugene often?

"Getting such a prestigious award like that (the Heisman), all eyes are on you," Newton said. "You've just gotta take that, knowing in the back of your mind that you're part of the fraternity that holds such great honor, and you do what you have to do."

Someone asked Newton if his dad, a controversial figure for his violation of NCAA rules through an attempt to get money from a school to get Cam to play there, would be at the BCS title game. Newton indicted Cecil Newton would indeed be there.

That said, Malzahn (below) has seen other teams come after Newton or hang back, and feels his offense can take what it is given. 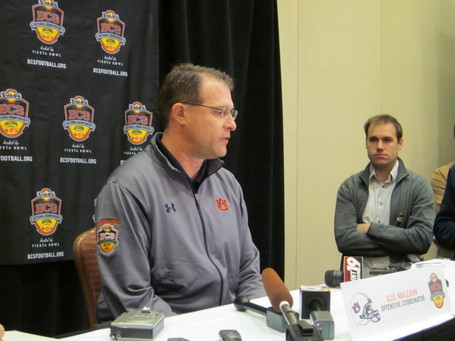 Aside from Mr. Heisman, the biggest presence of the morning belonged to one Nick Aliotti, Oregon's defensive coordinator.

"Let's be honest here, we're the red-headed stepchild," a red-faced Aliotti said of the Ducks' defense, as folks gathered around to hear his often shout-out-loud voice. 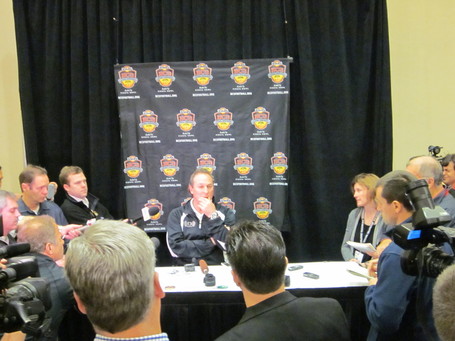 Aliotti had people laughing at the delivery of what amounted to nothing of substance in what he said. He was just... funny.

Oregon linebacker Casey Matthews talked about trying to stop the 6-6, 250-pound Newton. He stopped short of saying the Ducks will use a spy (perhaps himself) to shadow Newton, but that the Ducks must be concerned about Newton's running ability. Terrelle Pryor carved up the Ducks with QB bootlegs in the Rose Bowl last year, and Oregon lost to the Buckeyes 26-17.

"If you watch our team, it's hard not to be a fan of our offense, but we just go out each and every game just proving we DO have a defense as well... A lot of people don't give us a chance, but we've held true and we've showed we can play defense."

Matthews (below) has taken advice from his football-playing family.

"My brother gave me the advice to watch the stiff-arm from Cam," Matthews said. 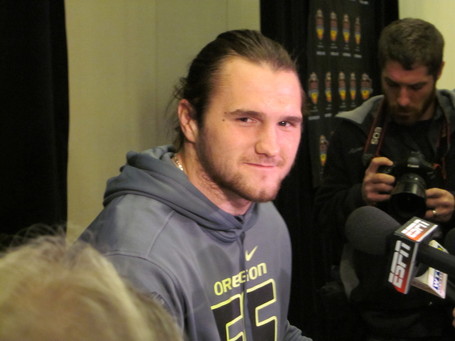