Your 15-Minute Window Into Oregon Practice

Share All sharing options for: Your 15-Minute Window Into Oregon Practice

It must have killed Oregon coach Chip Kelly to have to open up the start of Ducks practice to the media Tuesday morning.

You could just tell he wanted little to no part of the regulations. Nevertheless, the Duke of Duck let us watch. We didn't see much.

Some crazy variety of music playing over the Pinnacle High School stadium speakers. From Journey's "Don't Stop Believin'" to Elvis Crespo's merengue classic "Suavemente." I kid you not. Running back Kenjon Barner was moving his hips to that one, too.

The players stretched and coaches barked encouragement. The offensive line and backs hit blocking sleds. The receivers and tight ends caught passes from the quarterbacks. And then, after 15 minutes, it was time to go.

"Gotta go, guys!" a guy in a black shirt whose job it must have been to usher out the media shouted. Security was everywhere. Cops, dudes in polo shirts telling us where to park, media relations staff checking for the BCS-issued media pins.

The weather was nice, anyway. 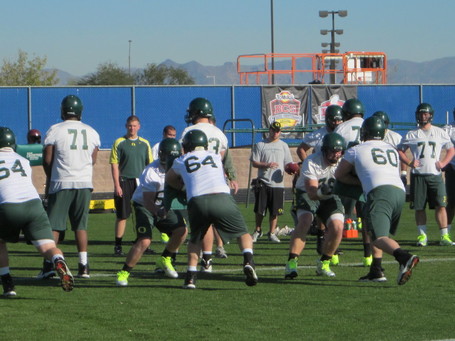