But Jones' heroics and numbers wouldn't have been possible if not for two of his receivers, Ryan Broyles and Cameron Kenney.

The two combined for 20 catches for 324 yards and a touchdown each as Oklahoma racked up the yards and points in its 48-20 win over Connecticut. Broyles, a junior from right in the heart of Sooner Country in Norman, Okla., caught 13 balls for 170 yards. Kenney, a senior, came up with career highs in catches (seven) and yards (154).

"Coach [Bob Stoops] just put us in a great position," Kenney said. "Play calls were excellent. Landry just continues to get better and better. He's having the confidence in us to make the plays whenever we need them on crucial downs. Just a good opportunity for us to go out there and execute them when we need to."

"Ditto," Broyles, a man of a few less words, said.

The Sooners couldn't have drawn it up any better, especially with co-offensive coordinator Josh Heupel (who won a national title with OU in his QB days) calling plays for the first time. Broyles was a magician in the slot, taking advantage of the open space he was given and hurting the Huskies over the middle. Kenney was the downfield threat, hauling in a 59-yard pass and running for his touchdown.

"It was in the air for a long time, I had a lot to think about," Kenney said of the TD. "I just knew I had to catch it and run."

"Those guys do a great job of getting separation," Heupel said. "Am I surprised that we were able to do some of the things we were? Yes, just because I really thought they [the Huskies] were very sound, very good on the defensive side of the ball."

Not nearly good enough. The Sooners put on a clinic. Jones was on target for the most part, receivers got open, the offensive line didn't allow a sack and DeMarco Murray rushed for 101 yards.

Broyles is Jones' prime target, a veteran with 13 100-yard games in his past 17. Kenney, listed as a backup on the depth chart, had a night to remember.

"Through the last half of the season, he has made some huge plays for us, and he did again [Saturday]," Stoops said.

Broyles (in photo below) was happy to help the Sooners break a five-game losing streak in BCS bowl games, two of those in Glendale. He said preparation was the key. The Sooners looked very prepared and in a rhythm on offense.

"We've been through a lot this year," Broyles said. "We've been preparing for this game for a whole month. Guys came out ready to play. 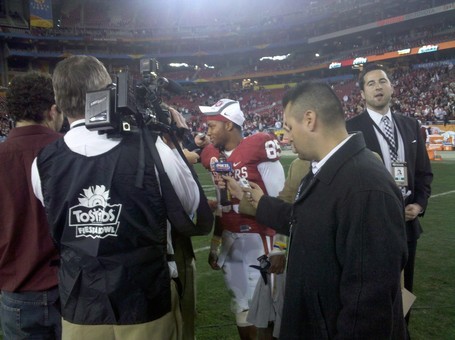