Oklahoma Sooners quarterback Landry Jones was named the Offensive Most Valuable Player for the 2011 Fiesta Bowl. There really wasn't any doubt about that award going to Jones as he posted a school bowl record 429 yards passing.

"Connecticut's a great defense, great team. We just came out here and executed our offense pretty well tonight," the sophomore quarterback said on the field after the game.

Jones threw just one interception to go along with his three touchdowns and completed 34-of-49 pass attempts. The interception occurred on a crossing route that OU Coach Bob Stoops said got botched when the receiver fell down and wasn't in position on the short timing route.

Stoops was effusive in his praise for this quarterback's performance in this game and all season long.

"Landry, I have been saying it all year, has a huge future. He has had a great - he had a huge year this year. I mean, this guy is special. He's a long way from a finished product, and he is already a special and great quarterback and everyone is realizing it."

Jones threw for 4289 yards on the season with  a passer rating of 145.21. He had 35 touchdowns to just 11 interceptions and was sacked just 19 times this season and has hardly touched by the defense in this game.

"(The offensive line) did a great job all night. I don't think I was on the ground the entire night. Everyone else's jerseys and pants are all dirty and I still look like I got mine out of the washer," Jones said. 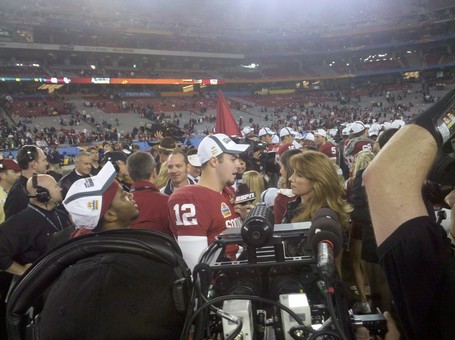 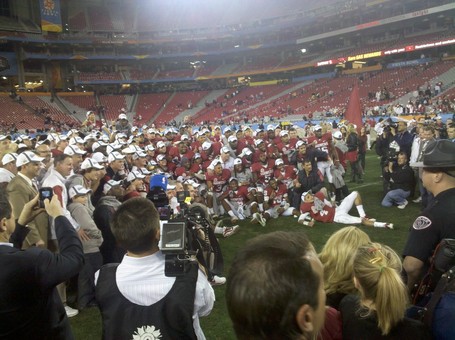 The Oklahoma Sooners pose on the field after their Fiesta Bowl win.