The Sooners of Oklahoma stuffed UCONN on their first possession and got the ball back quickly after the punt. In true Sooner fashion, Bob Stoops' team marched down the field on a nine-play, 71-yard drive that took only 2:57 off the clock. Quarterback Landry Jones found James Hanna for the first touchdown of the game.

Oklahoma had four plays go for over ten yards with Landry Jones already racking up 55 yards on 5-5 passing. Six first downs on the drive and only one third down play was not a good sign for the Huskie defense.

It's going to be a long night for the Huskies if the first two possessions are any indication. On UCONN's first drive of the game they managed just nine yards on three plays before being forced to punt the ball. 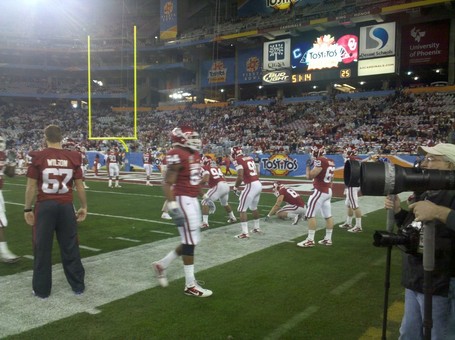 Oklahoma Sooners warm-up before the game.