Chances are good that most college football fans have recovered from their New Year's Eve party hangovers and will be fully good to go, and perhaps even ready to hit the beer again, by the time the Fiesta Bowl kicks off at about 6:40 p.m. local time. The problem of course, is the match up features two teams that aren't generating much interest on a national level outside the hard core fans of both teams.

Oklahoma (11-2) at least is a school with strong football tradition and comes in as the champion of the football powerhouse, Big 12. Connecticut on the other hand, sports a flimsy 8-4 record and arrives thanks to their status as Big East Champion which they earned via tie-breaker over West Virginia.

The BCS forces have combined to give us a game that on paper is completely lopsided with Vegas anointing the Sooners as 17-point favorites. Being the underdog is a familiar place for UCONN Head Coach Randy Edsall.

Things aren't all peaches and cream for the Sooners either. They bring in a dubious record in their last five bowl appearances. Coach Bob Stoops explained.

"I brought this up the other day. It's 0-3 in national championship games and 0-2 in BCS games, so if you want to be technical about it. But in the end, it's brought up. Our players are aware of it. But each year is a different game, a different team."

The key match-up in the game is between the effective running game of the Huskies lead by running back Jordan Todman who averaged 143 yards per game this season.

"They are a very physical, excellent running football team. Jordan Todman is a great back and very physical, strong in how he runs. But they're very creative in all the different ways they create scenes and create the run game. It will take a lot of discipline by our defensive guys to be in position, you know, to - you have to be physical to get off blocks, physical tackling and hopefully handle the run game. That will be a big factor," Stoops said.

The Huskies pride themselves on their defense this season but will have their hands full with the nation's fourth-best offense. The up-tempo style of Sooner play and the number of weapons they employ in their balanced attack has Coach Edsall searching for answers.

"Like I said, you feel like the little boy at the dike and the holes are starting to come in and you only have so many fingers to plug the holes, and they have so many talented, skilled athletes. And really what you have to do is you just have to - to me, you got to try to play good, sound, fundamental defense and execute your techniques because, again, they got good wide receivers, they got a good running back, a good offensive line. The quarterback is very good and very accurate," the UCONN coach said.

SB Nation Arizona is on-hand for this "great" match-up and will have tons of "great" coverage of the game. 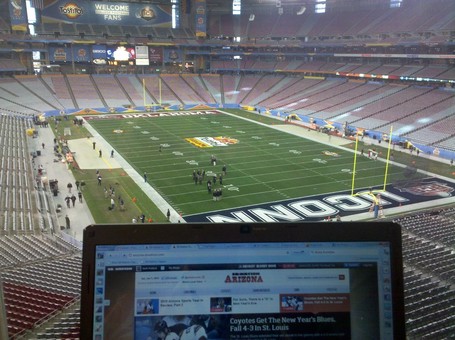