Jared Dudley Talks About Expectations For Suns, His Role And Contract (And Bobbleheads)

Share All sharing options for: Jared Dudley Talks About Expectations For Suns, His Role And Contract (And Bobbleheads)

Suns forward Jared Dudley was at the Phoenix Suns practice facility today for the first time this summer, along with newly acquired Hakim Warrick. Both just arrived in Phoenix this weekend.

All of the Suns players have now arrived for voluntary workouts except Goran Dragic and Hedo Turkoglu, who are playing for their national teams in Turkey at the FIBA World Champships. Oh, and Jason Richardson. He was expected today, but wasn't there.

Along with the Suns roster players (minus J-Rich, Dragic and Hedo) were a few familiar faces. Former NBA center and valley resident Greg Ostertag got some work in. He was big body for Robin Lopez to bang against.

Also present was former Sun and another local resident Steven Hunter. The eight-year NBA vet said he's talking about training camp opportunities with the Suns and Rockets. Recently married, Hunter is hoping he can make the Suns roster as a back-up center.

Steve Nash got some individual work in, but didn't participate in five-on-five scrimmages.

Jared Dudley talked after the workout about his summer, the team and his own brand-building Twitter campaign plans for this season.

Jared came to town minus 13 or so pounds. He said he weighs about 220 right now and weighed 237 this time last year and about 233 by the end of the season.

But he cautions, "It depends on what I eat at night time. If I have an little extra cookie or something, it might be one or two extra."

He wanted to slim down to help his quickness with some of his defensive assignments. Last year, Jared spent time covering the other team's best wing player, including Kobe, LeBron, and Durant.

Jared also wanted to add a little more explosiveness to what is jokingly considered to be the least athletic body on the team -- now that Jarron Collins is gone, anyway.

"What I really worked on last year was my three ball; this year was my one or two dribble pull-up," Jared said about his offseason focus.

Jared is sure his teammates will notice his new look.

"Everybody notices. We always look at everybody's bodies ... hopefully they call me 'skinny guy.'"

Perhaps Dudley was trying to avoid a repeat of an incident in practice last season when he had his back turned to the ball on a sideline out of bounds play. The inbounder (J-Rich, I believe) bounced the ball off Jared's backside and shot an open three. Needless to say, Jared took some jokes about his soft rear end that deadened the ball.

Jared is very aware that this is a contract year for him. He will be a restricted free agent at the end of this season and his goal is to just go out and have a better season than last year and see what happens.

Jared also knows that when the team does well, it benefits everyone.

The San Diego native talked about his status and desire to remain with the Suns.

"I'm going to be restricted, so it depends on whoever offers me at the end of the year. I want to be here. Obviously it's home for me, close to San Diego ... This fits," he said.

The Suns are a different team going into this season without Amare Stoudemire and having added wing players Josh Childress and Hedo Turkoglu, along with forward Hakim Warrick.

"I don't know how it impacts me. I'm still going to be behind Grant (Hill) ... me and him splitting time. When I have it going, I'm going to be in the game. Defensively, I think I'm going to be even better than last year and I thought I was pretty good," Dudley said.

Jared understands why expectations from the national media are low for the Suns.

"Everybody feeds off Steve and Amare," he said. "Let's be honest: 90 percent of our offense is pick-and-roll. He made me better, he made Channing better. Now it's an unknown. Anytime you have an unknown, expectations are low."

"Our second unit is strong. Our first unit chemistry has to get there. J-Rich will play a bigger role and Robin (Lopez). Robin now has to become someone who was a role player to a borderline All-Star for us to take that next step. If we ever want to get back there, it's going to be on his shoulders."

Jared had his first chance to work out with Robin today. He said the big man looked good, but still didn't seem to be 100%.

- Jared plans on cranking up his JMZ and Twitter work. He already tweeted last night that he would give away a pair of uniform shorts to whoever came to the arena, where he went for an evening workout. 30 people showed up according to Jared. He also talked about buying up all the "Dudley" jerseys in the team shop and giving those out to fans.

- But that's not all Jared has planned for this season, "I'm going to have my own bobblehead doll if I need to."

Jared also talked about making a thousand signs with a picture of him making the "three" symbol with his hands that he flashes after draining a three-point shot.

- Asked if he would sponsor an entire section of the arena like Andrew Bogut does in Milwaukee, Jared said that was too pricey for now. He's on a budget plan -- at least until he gets a new contract.

- JD, a big football fan, said this about the Cardinals quarterback situation: "I would have let (Leinart) play a couple of games -- but I'm not a coach -- then cut him."

As for his own team, the San Diego Chargers, Dudley said, "The Chargers, they'll win their division. You've got the Raiders who are terrible. Broncos (with) Tebow, first year. If he plays, they'll struggle. Chiefs are terrible. We should win by default."

- Dudley is trying to find a radio station to give him a one-hour radio show on a hip-hop show. He's looking for a drive-time slow and promises to use all his connections to have his athlete buddies call in. So, if you know any hip-hop radio station managers, have them contact JD. 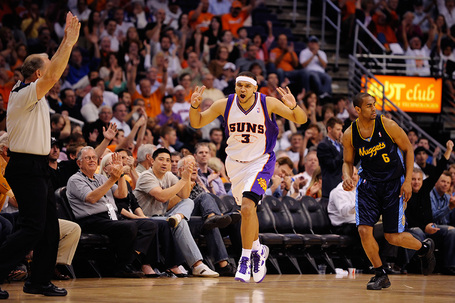 J-Rich Is Back And Wants The Ball