With Competition Over, Threet Can Excel When It Counts

Share All sharing options for: With Competition Over, Threet Can Excel When It Counts

Steven Threet had to win the starting quarterback job for ASU during practices in the offseason, and he had his moments of uncertainty and mistakes.

"I don't know. It's something about games, I guess," Threet said after Tuesday's practice at the Dickey Dome. "I like the lights being turned on or something."

Threet also wore a Jim McMahon-like headband under his helmet, even for the postgame interview session.

Seriously though...did he feel like a weight was lifted from him once he won the competition?

"No. No. I think it was just going out there in the game and that's all you're focused on and worried about," he said. "I just have to do a good job of practicing like that also."

The Devils welcomed back WR Gerell Robinson, a Chandler Hamilton product who caught 26 passes for 261 yards as a sophomore last season, to practice after a lengthy absence. Robinson is a big target who has been limited in practice last month because of a hamstring injury.

Coach Dennis Erickson said he was pleased with the explosiveness and mobility of Robinson in practice Tuesday, and Robinson can be added to a group of receivers that can play wide in multiple-receiver sets. 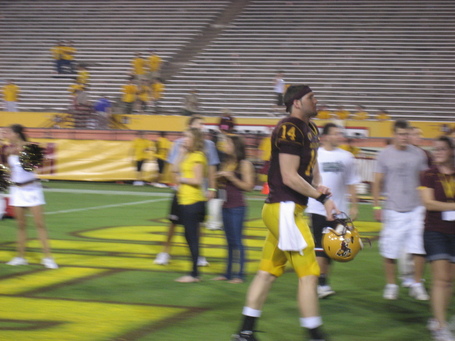