And so it begins, not with a whimper or a bang, but with a simple gathering of players in their new lighter, more breathable uniforms and a bunch of media types milling around hoping to get a good quote or a better sandwich.

That's how things are playing out all over the NBA today as teams kickoff the 2010-11 season with their formal media day events.

For those not versed in the fine dance that dictates such occasions, we will walk you through what happens at media days: 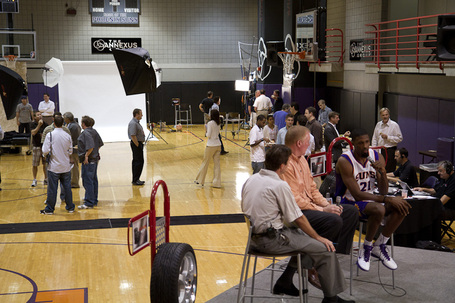 1) Pictures. Lots and lots of pictures. All those pictures that show up in posters, on tickets, on the sides of buses and trains -- they were most likely taken at media day in front of a white or green backdrop. And video, too.

You will see players posing with the ball in one hand, the ball in two hands, the ball behind their head and then in some action shots dribbling the ball. Coaches, too.

2) Press conferences. This year, it was Steve Nash and Alvin Gentry who got up on the podium and answered insightful and brilliant questions (from me) and whatever other dumb crap the rest of the horde felt like bugging them about.

Just kidding -- I only asked one question and it was probably as dumb as the rest. 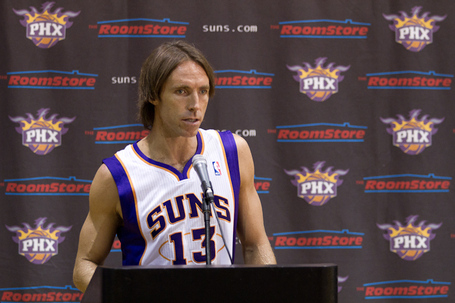 The rookies and young player seem to enjoy it (except for the ignored camp invitees that might not make the team and/or the media don't recognize, like Zabian Dowdell or Garret Siler).

Vets like Grant Hill strategically time their descent on the practice court (the venue for Suns media day) so as to not have to wait in line at the various photo stations and hence avoid answering the same questions from the local light rock radio station over and over.

Live radio and Suns.com webcast interviews are also going on, along with various TV stations doing their stand ups. For someone like me with a face for the Internet, it can be quite difficult to make sure you are constantly not in someone's shot. So, if you are watching Steve Nash and you see some guy in the background stuffing his face, you should try and not make too much fun of him -- especially if he's wearing a kind of orange and yellow print shirt. 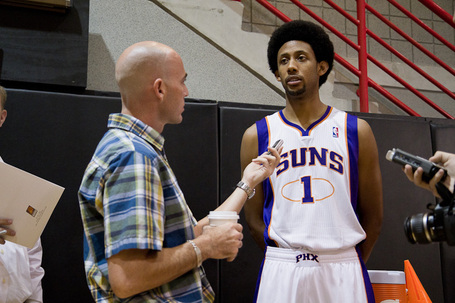 4) Credentials. Season credentials are handed out to the media, along with T-shirts (this season) and a media guide for the preseason that has useful information like the exhibition game schedule and Robert Sarver's bio.

5) Free lunch. The Suns do a bang up job catering these types of things. Today, the menu included a variety of sandwiches, fruit, fruit salad, veggies, Caesar salad, a pasta salad, cookies, lemonade and water. This was the same menu for every other mid-day catered Suns event -- not that I am complaining in the least. Yum.

6) Mingling. And underrated part of media day is the "first day of school" vibe with various people (and players) saying hi and talking about their summers. Hands are shook and stories exchanged. 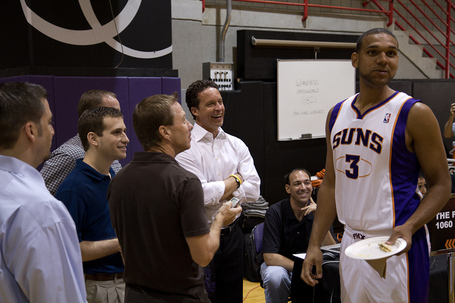 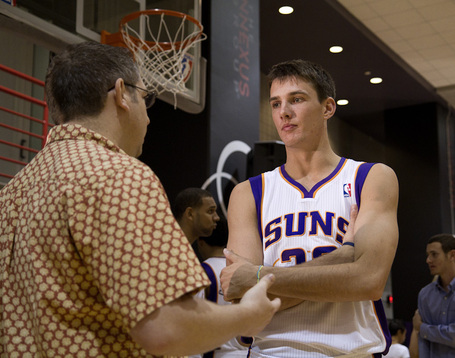 As for this season's Suns media day mood, there's not much to say. Seemed pretty normal.

Guys like Goran Dragic and Jared Dudley were talkative and having fun. Guys like Matt Janning and Dwayne Jones looked thrilled to just be there. Guys like Robin Lopez and Steve Nash put on a brave face and got through it without breaking anything (or anyone).

If you are looking for some clue as to how your team will perform in the regular season based on what happened today then I am going to have to disappoint you. Perhaps someone else can glean something from the shape of Josh Childress's hair that translates to more (or fewer) wins, but those are talents that I don't possess.

The team has now departed for San Diego, where they will spend the next week at training camp. They have a lot of work to do adjusting to the new players and figuring out rotations. 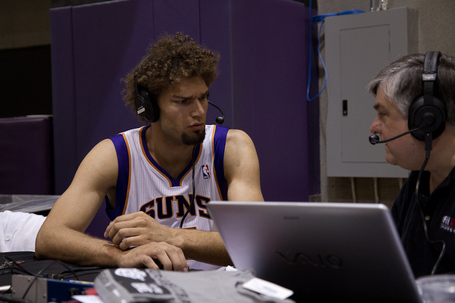