If there's one thing we hear all the time it's that NFL football is a game of rules. People love to have some rules. Can't have chaos, so we got to have us some rules.

And one rule says that you can't touch the official. Except players touch officials all the time when they are talking or want to, you know, get the officials attention.

Of course, players should not be "laying hands" on the officials in any kind of aggressive manner, but what happened with about four minutes left in the Cardinals/Falcons game was a touchy official overreacting to Kerry Rhodes.

Rhodes gets up off the ground and approaches the official, who is walking near him but not looking in his direction. Rhodes puts his hand out to tap the official on the shoulder to say something (a gesture that is extremely common in all sports between players and officials) and the official freaks out.

You can see the official put up his arm, shove Rhodes in the chest and then throw his pretty yellow flag. After talking to his buddies, they decided that Rhodes "grabbed" the official and he was ejected. I am sure the rules-loving NFL will fine him as well.

Chill out, zebra. The big bad (Cardinal) man isn't trying to hurt you. 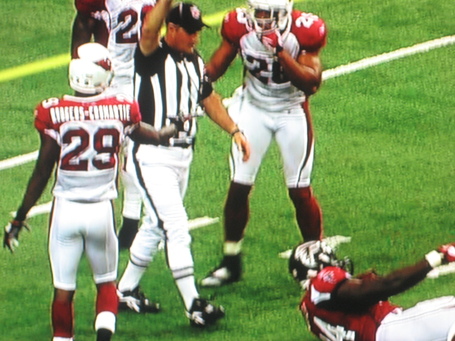 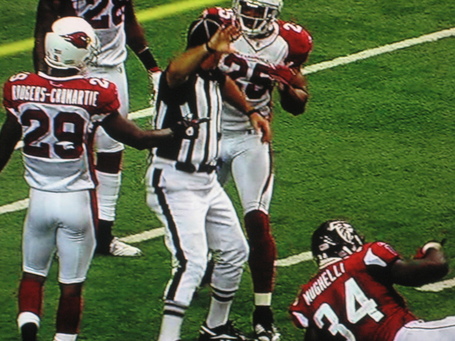 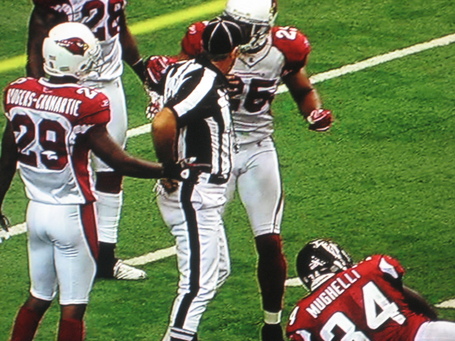 Horrible Showing From Cardinals In 41-7 Loss To Falcons