Barry Enright, Already Special Through 12 Starts, Feels He Can Get Even More Special

Share All sharing options for: Barry Enright, Already Special Through 12 Starts, Feels He Can Get Even More Special

If you are not rooting for Barry Enright then you hate baseball, apple pie, America and probably your own mother and in that case, we don't want to know you. (Although we do appreciate your patronage, thanks. We're not that picky.)

Before sweeping the division-leading Padres today and beating yet another NL Cy Young candidate (where you at, Jimenez, Lincecum and Latos?) -- not to mention that Strasburg kid before his elbow blowed up -- Enright had an ERA of 2.44 in 66.1 innings of work.

After today, where Barry gave up only two runs in seven innings, that's about the 12 most awesomest games to start a pitcher's career in this history of the universe (give or take).

And yet, Enright insists he can get better. 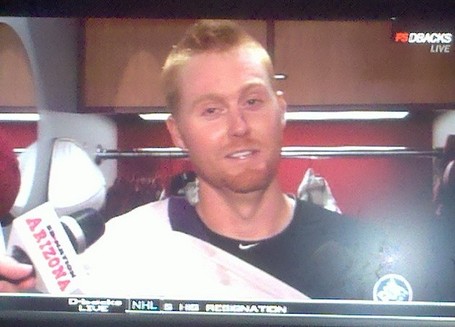 "I've been struggling throwing my slider as of late," said the man who only threw 14 pitches in the first two innings. "When I felt like I had it in the bullpen (before the game), to kind of get hit hard in the game* is frustrating, but it's coming along. I've been throwing my change-up better and my curve ball better. Attacking with the (89 mph) heater is going to be my forte, but when those (breaking pitches) come along, it could be special."

How does it get more special than the last 12 starts for this young up-and-coming ace?

*Barry said the solo home run he gave up to Tejada was on the first slider he threw and another was hit hard by Cunningham to left field.

It would seem that Brandon Allen has found the secret to having a great (GREAT) day in your major league season debut.

Allen is a first baseman who only recently started getting some starts in left field in Triple-A. Today, he got to face Mat Latos AND play out in left in a ballpark he's completely unfamiliar with, having never even had a chance to shag balls.

Allen hits a Grand Slam home run in the seventh to go along with a base knock against Latos in his first at bat. Add to that a leaping grab against the fence that prevented a run in the fourth inning and another fine running catch in the seventh and you could say that BA had a nice day.

His secret, it turns out, is no sleep. He got the call that he was coming up to the big league club last night and by the time he was done packing his apartment a bit and catching an early flight to Phoenix, he ended up not going to bed at all.

It would seem that the kid is going to have to learn to play with no rest, since he obviously has to follow a similar pattern if he wants to repeat this performance. No sleep for Brandon. 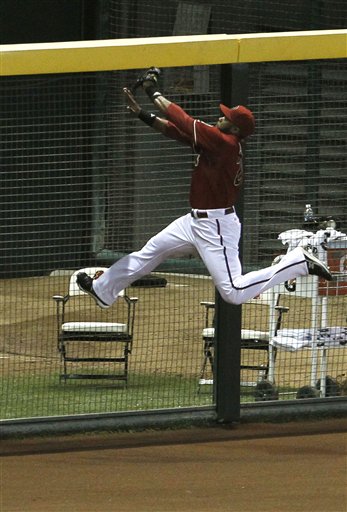