Ice Edge Holdings, erstwhile future owners of the Phoenix Coyotes, dropped this note this morning through their COO, Daryl Jones: 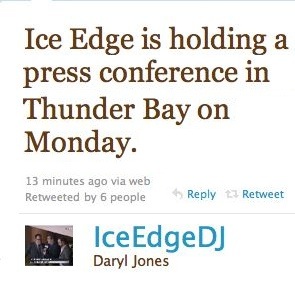 That's Thunder Bay, Ontario, where many Ice Edge executives are based.  Which is in Canada.  Which is not in Arizona.

And just a reminder of why Thunder Bay should send a shiver down the furry backs of Coyotes fans from last May via Scott Burnside of ESPN.com:

That doesn't have to involve the Coyotes franchise, especially since Ice Edge lost sole negotiating rights this month after being unable to prove they had the wherewithal to make the deal.  However, Burnside mentions in the same May piece that a Coyotes move to Winnipeg could move the Winnipeg AHL team to Thunder Bay.

Or Ice Edge could just be making a big show of quitting the NHL franchise acquisition game.  At least Ice Edge gave Coyotes fans 48 hours to down Maalox again.