Share All sharing options for: Strikeforce Houston: Griggs Talks About Upset Over Lashley

In the opening fight of the SHOWTIME telecast, Chad Griggs won an upset, TKO victory over previously unbeaten Bobby Lashley at the end of the second round.

An experienced and talented wrestler, Lashley immediately took the fight to the ground in the first round. He expended a lot of energy trying to hit Griggs (9-1) while on the ground, but Griggs was able to counter and opened up a gushing cut over Lashley's left eye.

Once again, Lashley (5-1) took the fight to the ground in the second, but his punches didn't do enough damage to the more experienced Griggs. The cut worsened with Lashley apparently gassed in the closing moments of the second round and the referee called the bout immediately following the conclusion of the round.

"This is a dream come true fighting for STRIKEFORCE. I got offered a big fight right off the bat and I'm super pumped I got the win," Griggs said. "I know he was bleeding all over me. I think he was tired and he was hurt already. I think it was a good call to end it.

"I felt him starting to fade a little bit at the end of the first round. I could hear him breathing really hard and could feel him using a lot of muscle to land punches. I was comfortable because he wasn't really catching me and he was using a lot of energy. I don't think that he's really been hit before or been tested. I could see it in his eyes that the fight was changing. He was still hustling, but I think he was losing some heart in there." 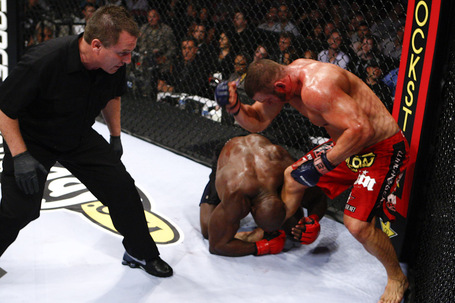