The air temperature and the throng of media who stood and watched the whole thing in the sun. At least the fans got to sit on the shady side of the stadium. 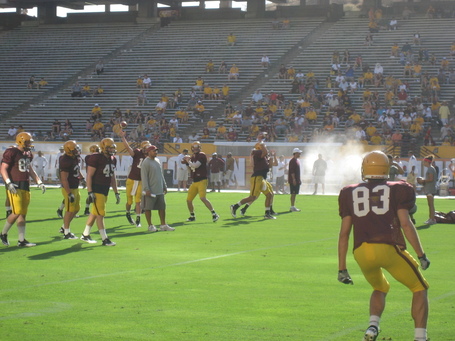 Perhaps more important is who wasn't so hot. The fact that Brock Osweiler, Steven Threet and Samson Szakacsy combined for one real touchdown drive -- Threet ran in from a yard out, but only after his first drive stalled and was restarted in goal-line offense -- didn't appear to bode well for the Devils' offense this season. And the fall camp quarterback competition, which seems to be down to Osweiler and Threet, is not yet decided.

No one quarterback stood out. All had their moments, good and bad. Coach Dennis Erickson ended the scrimmage 45 minutes early because defensive players, shorthanded in number because of some minor injuries, were feeling drained of energy in the heat when the offensive went to no-huddle.

"I've got to look at it on tape. There's so many things that you guys think you see out here that when you look at tape, it might be a little different... All four of them had their moments. Steven had that first drive and Brock came in the last time. The biggest thing I can say is the improvement of all them from spring football to camp to now is unbelievable. They've made that type of improvement. That's what competition does."

Threet (below in photo) opened with the first unit. On his 12th play, his third-and-7 pass for Aaron Pflugrad, from the 11-yard line, was incomplete.  Threet stayed on to run the goal-line offense and scored on a sneak. 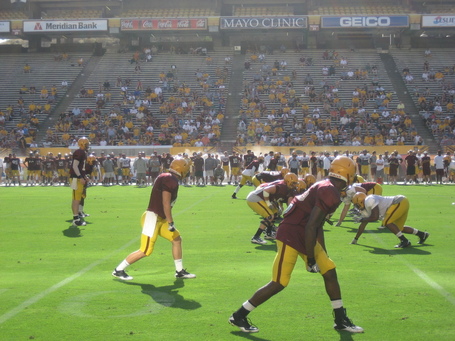 Next was Szakacsy. He threw a nice ball to Kevin Ozier over the middle for a first down, but on his sixth snap was sacked. Or he would have been if the quarterbacks were allowed to be hit. Szackacsy ran 11 plays, and on the final one he would have been sacked by defensive end Jamarr Robinson.

Third up was Osweiler. His first pass went to T.J. Simpson, who made a nice catch. Every time I've seen Simpson, he has impressed.

Osweiler also hit A.J. Pickens for nine yards, and after throwing behind Kyle Middlebrooks on third down, stayed on and engineered a drive from his own 35 to the defense's 36-yard line.

Running back James Morrison showed some tough running before Threet came back on. Threet's second drive was much sharper, with long completions to Middlebrooks and J.J. Holliday (tipped ball). He also ran for 10 yards. But on third-and-6 from the 9, Threet was locked onto his receiver in the end zone without considering his options, it appeared, and the pass was incomplete.

Erickson barked at Threet, unhappy with the play. Threeet said later that he was satisfied with his performance except for that pass.

After a long Thomas Weber field goal, Osweiler returned. He had 14-yard pass to tight end Ryan Skorupka and mixed up runs and passes well to get to the defense's 19-yard line. On first down, he found an open Kerry Taylor, who'd beaten his man, and the throw was on target for a touchdown.

"We all got reps with the ones, we all got reps with the twos," Osweiler said. "It was a positive day... I think we still moved the ball pretty well. One of the biggest things is our tempo. We're in such good shape right now that there's going to be a lot of teams out there that are not going to be able to compete with our style of offense and how quickly we move that football."

Osweiler would like to get the offensive line up to the ball quicker. He also said he is getting better, either mentally or physically, every day.

"Anytime you come into Sun Devil Stadium, you have a live scrimmage, you have fans, you have media, you have coaches, you've got to perform. If you don't perform, you're not going to play," Osweiler said. "Saying that, I think we did."

Szakacsky ended the morning on a down note, dropping the snap and kicking away the ball in frustration before underthrowing a pass for Angelo Magee.

At the end of the day, it was hard to pick a clear-cut front runner for the job. Erickson said the team will start game planning for Portland State this Tuesday.

"I'd like to make a decision as soon as we can," Erickson said.

Hit of the day: Safety Keelan Johnson blasted receiver George Bell, who was an open target after Osweiler led him a bit too far on the left sideline.