Several new D-backs are no strangers to this area, and when it comes to their new teammates, it's a small world.

Infielder Bobby Crosby and pitchers Daniel Hudson and Joe Saunders came to the Phoenix area for spring training every year with their respective former teams. And pitcher D.J. Carrasco is a native of Safford in southeastern Arizona and once played for Class AAA Tucson.

Nevertheless, there are adjustments to a new team, new clubhouse and new city and state to be made. Ryan Church, another recent acquistion via the club's four trades, hasn't even reported to the team yet. He's expected Tuesday, manager Kirk Gibson said. 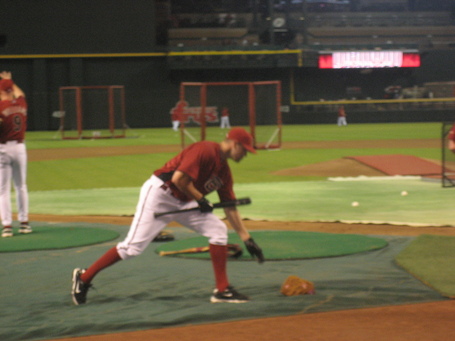 Crosby, 30, is excited about the new opportunity in a new place. He had been with the A's for seven seasons until signing as a free agent with the Pirates before this season.

Crosby added that he was glad to get into Sunday's game, just so he could overcome some nerves he felt.

Hudson was already into his old Chicago White Sox routine, getting in some weightllifting Monday after his solid start Sunday in New York. Then he took batting practice.

"I asked him when was the last time he hit," D-backs manager Kirk Gibson said about Hudson, 23. "He said high school."