Share All sharing options for: Mercury Notes: Taurasi Talks Technicals, Bonner's A Knock Out, And Resting For Finals Run

The Mercury are two games away from wrapping up a very crazy season. There's been times when they've looked invincible and times they've been run out of the gym.

My best guess is they did just enough to secure the second seed in the West and have been saving the rest for another run at a title.

In the meantime, the Mercury technically have two games left even though the results won't matter in the least. As you can imagine that sets up the classic tug-of-war between coaches who want to rest star players and front office people who want people to buy tickets to those games anyway.

"Average is probably around 30 minutes per game for most of the players. We'll probably cut down to like 25 or 20," said coach Corey Gaines after today's practice. A practice that Diana Taurasi and Penny Taylor sat out of.

Asked if Taurasi would start Friday against the number one seed Seattle Storm, Gaines gave a vague non-answer. I don't expect to see her play.

Penny Taylor said her right ankle is fine. She sprained it last week in Indiana and sat out the next game in New York. A game the Mercury lost by 38 points. If she plays Friday and in the final game in San Antonio on Sunday it will probably be limited minutes.

DeWanna Bonner talked about the hit that knocked her out cold for about two minutes during the Mercury game on the eighth of August. She said that Shavonte Zellous, a friend of her's, hit her in the face with an off-hand fist.

I asked DeWanna if she thought it was accidental, "I hope so. I hope I didn't do anything to make her knock me out like that. I think so. She apologized and we moved on. No hard feelings, she's my friend."

Bonner was dizzy and had a headache for a day or so but recovered quickly and was able to play sooner than originally thought. She's fine now aside from being a bit out of shape from missing a couple of games.

Dianai Taurasi is one technical foul away from a suspension. Asked about it, Coach Gaines said, "I like her emotion. I'd take emotion any day. Tommy Lasorda was here and he said, 'I'll take a player with emotion any day over...'."

At this point Gaines made a blank, blah face which didn't translate well to my voice recorder.

Taurasi didn't have much to say about it either, "Nothing new. Nothing new. Another day."

Do you play any differently? "Nope, I play the same way every game whether I have ten or one, I'm playing the same way."

As for her elbow that broke Jessica Davenport's nose, "It was just an accidental play that happened and you've got to move on. I hope she recovers well." 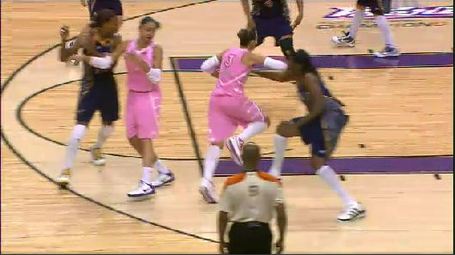 Still doesn't look all that accidental to me but then again, what else is Taurasi going to say at this point?