Earlier this month, SB Nation Arizona's esteemed poobah Seth Pollack suggested a few ex-Diamondbacks you might see get numbers retired to provide the occasional artificial boost in attendance for a moribund franchise cutting costs. At this rate, you might as well print it off and use it as a checklist in 2011; labor spending isn't headed up any time soon.

In completely unrelated news, the Diamondbacks failed to sign their first-round pick in 2010, Barret Loux, after being shocked, shocked to find there was possible injury risk from a pitcher who had well-publicized arm surgery in 2009. In return, the Diamondbacks will receive essentially the same pick (#7 instead of #6) in next year's deeper Rule 1 draft while not losing their current one, and Barret Loux gets the boot.

For this, Loux can send thanks to MLB ownership desperate to squeeze down negotiating positions for amateurs (while seemingly unable to stop paying draftees over MLB-recommended slot money) and a players' association focused on its veterans more than its non-voting incoming members.

Ah-ha, but then the Diamondbacks will simply spend more money next season in the draft, so they're not cheap!

Alas, there might a slight increase in 2011, but don't be shocked to see overslot money in later rounds skipped to compensate for multiple first-rounders. Plus, money not spent this year can be used in debt service earlier to save on fees and interest.  (By the way, the Debt Service jersey is still available in the team shop; order now!) 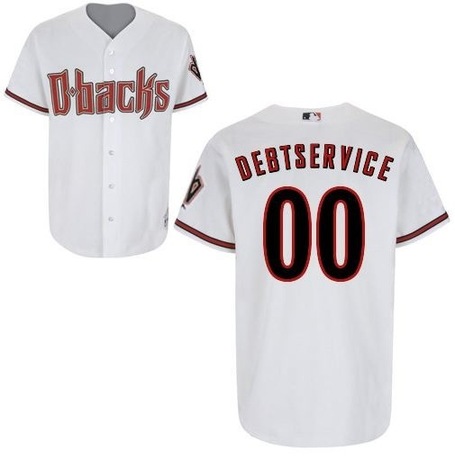 The other two teams who failed to sign their first-rounders in the top half of the draft (Padres, Brewers) took slightly less curious paths to the same end. (The Padres lost their pick to college; the Brewers' pick was diagnosed with Type 1 diabetes after the draft and decided to stick close to home to treat the disease.)

The MLBPA, awoken from its groggy sleep at the sound of a missed $2m bonus check, has made rumblings about protesting the Loux non-negotiation, but there's not much likelihood of a positive resolution for Loux. Now he waits a year and hopes to be drafted in a much, much richer talent pool with only a year of independent-league ball to prove his arm doesn't actually have explosive qualities.

On the other hand, you have to commend the organization for finally finding a way to save money after discovering an injury in this health care environment. The Diamondbacks were nearly forced to trick Eric Byrnes and his expiring contract into punching Francisco Rodriguez's girlfriend's father.

So get used to a lot more waving from Luis Gonzalez and a lot less of Barret Loux and his expensive ilk at Chase Field for the next couple seasons. After all, Loux could really hurt his arm with all that waving. Watch out for shrapnel!

Since this was originally published, the Diamondbacks and Loux released a joint statement announcing that the MLB Commissioner has allowed Loux to become a free agent.