First round of the first fight is in the books. Jace Crawford and Frankie Saenz fighting at 155lbs.

Frankie had Jace down most of the round and landed some solid blows...and that's how the next two rounds went. Frankie won on an unanimous decision.

The second and third fights were both similar to the first. One clear winner but both went to decisions:

Andres Acuna over Edwin Louis and then Rob Anderson over Alonso Fears.

The fourth fight was much better, and quicker. Joel Champion of Tucson pummeled Sean Scott. Champion knocked Scott down with a kick to the mid-section and then pounced on him with heavy blows until the ref stopped the fight. Scott was out cold and down for several minutes. He walked out of the cage but won't likely remember it.

In the fifth fight, Jason Richey edged out a crazy looked dude named Edmund Xehili in a split decision. Xehili was penalized a point late in the final round for hitting to the back of the head. That probably lost him the fight.

The next fight was our first controversy. Ryan Diaz was dominating the standing game with some sweet kicks but an unassuming kid named Chris Gruetzmacher did his work on the ground and somewhere landed a blow that split Diaz' eye open. They called the fight which clearly incensed Diaz and most of the crowd. Chris got the decision by TKO which really wasn't fair to Diaz.

The sixth scheduled undercard fight was canceled with no reason given. It was supposed to be Christian Grosinsky vs John Wood. It wasn't. Instead there was a long break.

The final undercard was the reserve fight for the women's tournament. Liz Carmouche, the ex-Marine, dominated the college girl from Berkley, CA, Colleen Schnieder. Score one for the red team. 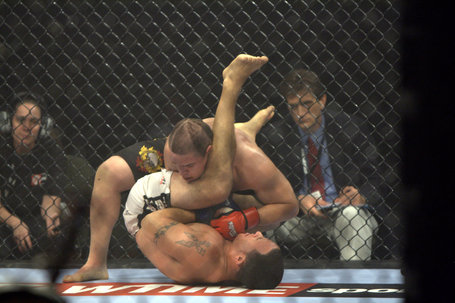 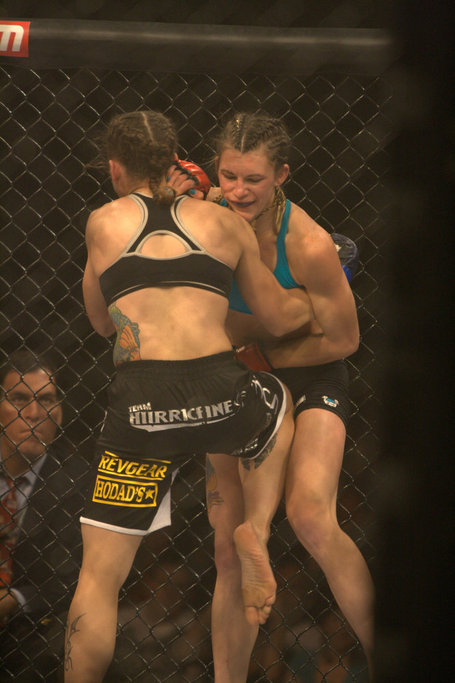