Barry The Red Conquers Jesus (Or, How I Defeated The Messiah, Pillaged His Home, Then Guzzled Grog In His Kitchen Until I Passed Out)

Share All sharing options for: Barry The Red Conquers Jesus (Or, How I Defeated The Messiah, Pillaged His Home, Then Guzzled Grog In His Kitchen Until I Passed Out)

So ‘twas written that a Day in the Neare Future (Sunday, actuallie), that Barry The Red (he of Unequaled Braverie and Valor, who hath destroyed Evils ancient and moderne, bedeth unrivaled quantities of the Fairest of Maidens, and vanquished innumerable Gallons of Grog and Spirits both weak and vomit-inducing) ventured to the Capital of our Fair Countrie in hopes of conquering the False Messiah - He Who Hath Striken Out A Crap-Ton Of Batters, Sir Stephen Of Strasburgia.

Strasburgia, Barry knew, was a foul countrie, one in which there was little Grog to imbibeth and a Childe merely learned to defeat another in Battle at the late age of Twelve instead of the customarie Six! A Sham, Barry had Declared with muche Emphasis, for He hade defeated many Childes in battle from the moment His red haire hade breached His Mother's fair womb. (Barry The Red, ‘twas told in Storie and Song, was borne holding an Axe for Battle in one hande and a Fair Maiden, eager for bedding, in His other.)

‘Twould be a Battle, it was written, never before witnessed in the Historie of Baseball, a Battle in which two Newbie White Guys woulde throw Baseballs quite fastly at Batters, who woulde then fail to hit these Baseballs and thus be Striken Out manie tymes.

Barry The Red, being of Unheralded Historie and without Hype and Media Ass-Kissing, would then Striketh Out more Batters than Sir Stephen, leaving Sir Stephen in Utter Defeate and Embarrassment, to returne to Strasburgia where the Media woulde likely continue with Unqualified Ass-Kissing and News Storie saturation, though Sir Stephen woulde know deepe in his heart that he hade been proven a Sham.

Oh, the Washington Media woulde likely declare that Barry The Red hade encountered a faire portion of Luck in His victorie, but those from the Desert Countrie would know well the skille of Barry The Red and would thusly celebrate his Victorie over the False Messiah before waking up the next daye to the Solemn realitie that ‘twould be manie dayes until Barry The Red pitched again. Until then, there woulde be some usual Diamondbacks Baseball to endure, Baseball which maye include losses and Bullpen pitching of a Lowe Qualitie. 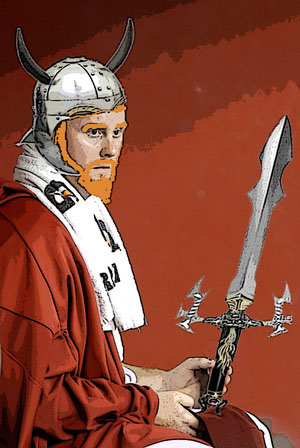 Disclaimer: For the avoidance of doubt, the image set forth above was obtained from Getty Images, Inc. and has been modified for the express purpose of the aforementioned satire ("Satire"). By clicking on the above story the reader has made an implied agreement with SB Nation Arizona that they are of sound body and mind to comprehend both the satirical work of art and the use of the picture for satirical purposes. Provided such reader is unable to process the above Satire they agree that SB Nation Arizona may assume their IQ is significantly lower than the state average of school children for Mississippi.