TriskaidekaPhoenix: Friday The 13th Shouldn't Be Feared In Arizona

Share All sharing options for: TriskaidekaPhoenix: Friday The 13th Shouldn't Be Feared In Arizona

As a matter of fact, for Phoenix sports fans, it's a number that should be celebrated rather than loathed.

Why should the number thirteen be celebrated, you ask? While it's quite simple, it's had its fingerprint on some of the greatest moments and players in the cities history.

Think about it and it will become clear. 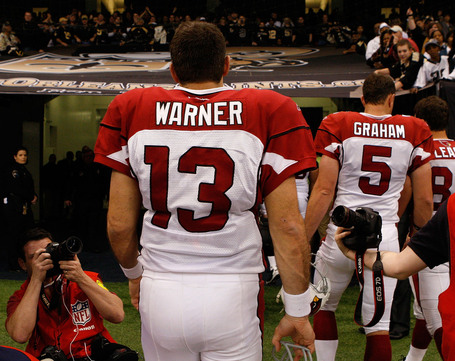 The obvious two are Kurt Warner and Steve Nash. Both donned the number thirteen as they led their respective franchise to new heights of success.

Nash won back-to-back NBA MVPs, revolutionized the league's view of offense and led the Phoenix Suns to one of their best five year stretches in franchise history.

Kurt Warner's success was even more impressive while wearing the number thirteen here in Phoenix. I mean honestly, what more do you need to know other than the fact that he took the doormat of the NFL, the Arizona Cardinals, to within a minute of their first Super Bowl title?

That not convincing enough for you? Well, the number thirteen runs deeper than just those two well known superstars when it comes to Phoenix sports success.

Signal caller Sherdrick Bonner wore the number as he led the Arizona Rattlers to five Arena Bowls and two titles (1994,1997). He also racked up enough passing yards in his fourteen seasons - you thought I was going to say thirteen, didn't you? - as a member of the Rattlers that he ranks in the top five in Arena Football League history for yardage (42,246), touchdowns (855) and pass completions (3350).

Chris Jacke may have only worn thirteen for a season and a half as the Arizona Cardinals' kicker, but his impact was massive. He hit the 52-yard game winning field goal against the San Deigo Chargers at Sun Devil Stadium in the 1998 season finale to send the Cards to their first playoff birth in Arizona. A moment that still to this day sends tingles through my spine.

Not to be outdone, Midre Cummings, who wore thirteen for all of twenty at-bats as a member of the Arizona Diamondbacks, scored the tying run in that fateful ninth inning of the 2001 World Series as a pinch runner.

So on this Friday the 13th, cheer up. There's nothing to fear but fear itself and Michael Jordan, John Paxson, Santonio Holmes, Buddy Ryan, Dennis Green, Terry Porter, Josh Byrnes, Joe Germaine, David Boston, the mid '90s Rockets and the Lakers in Phoenix sports.