The weigh-in went about as expected. Guys and girl walked up, stripped down to the various underwear, stood and the scale and then posed for pictures.

I suppose if you are into such things, it was an opportunity to see what a lot of different people are wearing beneath their clothes. Some boxers. Some briefs. Girls in panties and bras. Pretty much exactly how you would imagine it.

The results are listed on the fight card below which you can also view here: Strikeforce fight card weigh-in results

Here's the notable names and their weights:

Taylor certainly looks the part and wins the award for the most interesting underwear. He looked like he was wearing white boxer briefs that had been hand painted with various designs. He got some recognition for his artful undergarments. 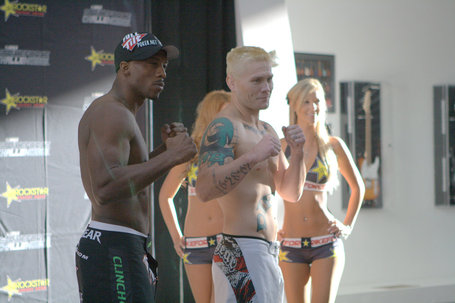 For the women, they did the draw for the tournament which came out this way: 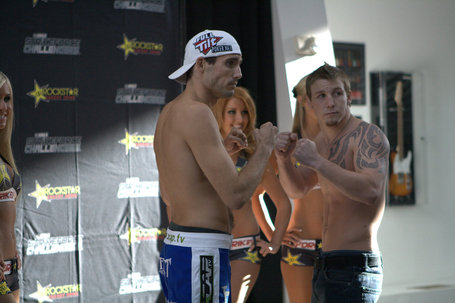 Akano was actually 135.2 until she took off her shorts and stepped back on the scale. Damm, is by far the fiercest looking of the girls which had nothing to do with her unshaven legs which were back-light by the sun coming through a window.

This will clearly be the better of the two opening round fights. Both are somewhat unorthodox in their styles and both are experienced and look determined.

Tate should have an easy time of this and if she doesn't go right through her sweet-faced Finnish opponent than she doesn't belong her anyway.

Tate, in case you were wondering, was wearing a neon bikini for her weigh-in. She could have kept her shorts on like the other girls unless she needed the extra few ounces but choose to immediately show off her ... form. 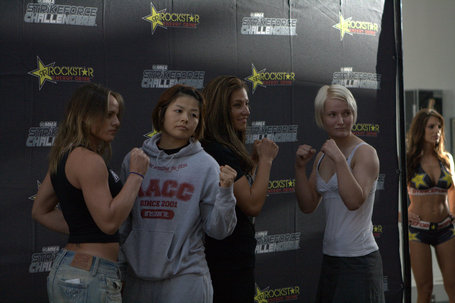 The plan originally called for two rounds with the winners of the first two fights facing each other in a third bout. Both the first round fights and the final fight were scheduled to be three, three-minute rounds with a "sudden victory" round should the three rounds yield a tie.

MMA Junkie.com reported that the Arizona Boxing Commission stepped in and nixed that plan. They've cut the first set of fights to only two, three-minute rounds with no draws allowed.

We spoke with the Arizona State Boxing and MMA Commission Executive Director, Dennis O'Connell, who stated that he made the decision to limit the total number of rounds any one fighter could possibly fight. According to New Jersey rules, which Arizona just recently adopted, a non-title fight should be no more than 5, three-minute rounds.

O'Connell stated that the timing of the decision was based on recent adaption of the Arizona law that adopted New Jersey's rules which only went into effect on July 29, 2010.