Miesha Tate: Men Are Instinctual Killers, Women Have To Find Their 'Inner Warrior'

Share All sharing options for: Miesha Tate: Men Are Instinctual Killers, Women Have To Find Their 'Inner Warrior'

Maybe because I am pushing really close to turning 40, I was expecting a more macho reaction. But I was (pleasantly) surprised to see the reaction here and that of the comments on this topic at SB Nation's fantastic Bloody Elbow site.

Not a lot of time was spent on glorifying the sexual aspects and yet there's a realistic understanding that it is a part of the sport, as Taurasi put best, "People like that. People like to watch that. It's no different than watching a boxing match. Those guys have nice bodies. I don't mind watching just to see their bodies. I really don't know who's going to win and don't really care."

Miesha Tate, being an actual female and an MMA fighter, also had some thoughts on the subject when we spoke Wednesday at a pre-fight workout prior to Friday's Strikeforce Challenger Event in Phoenix.

She was dressed in workout clothes, but her hair and make-up were done and she certainly smelled nicer than the male athletes I'm used to working with, a metaphor perhaps demonstrating that it's not an either/or proposition between athlete and woman. She was embodying and presenting both aspects to the world with no sense of incongruity.

"Obviously, the women are always compared to the men in our skill level and talent level. A lot of people criticize and say the women aren't there yet (with) skill and they don't have the power," Tate said. "I just think that's kind of absurd because our best fighters, the top ranked fighters right now, have been fighting three or four years. Even Cyborg (Santos), maybe four years. (Sarah) Kaufman about four years. Me, I'm working my way up there about four years."

This issue about time is something I've heard from several MMA experts and it makes sense, of course. But at the same time, I still wondered if there was an inherent difference between the men and women, assuming similar experience and skill levels.

Miesha initially said there was no difference, but then talked about the extra motivation that women have to prove themselves.

"That's really the only difference. I think when women fight, we're not just fighting to fight. We're fighting to prove something. To open people's eyes, and that just adds to the intensity. That's why a lot of times women will steal the show."

She called the women "go-getters" whose desire translated to a more aggressive and straight-forward fighting style.

I guess I am still looking for something more technical, maybe related to flexibility, hand speed, or toughness. Perhaps there's an emotional component that either fuels the women's hate for each other or maybe allows women fighters to think more clearly in the ring and not be clouded by masculine pride and anger.

Tate did have another interesting philosophical insight, "Overall, men, if you think about evolution, men have been fighting and killing each other for thousands of years. It's more instinctual. Something that's more of a learning process for the women. We're behind the curve, but I think we're doing exceptionally well."

Men, she said, grow up learning and being expected to fight, whereas women aren't raised that way. 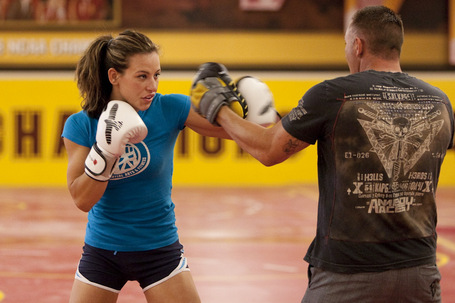